Whatever Happened to Saturday Night: A Review of Nobody Move (A Novel) 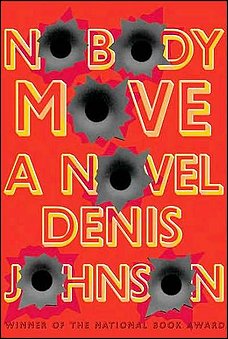 A talented young writer wins the 2007 National Book Award for a serious novel about the Vietnam War.   Then he decides to sell a four-part retro breezy crime serial to Playboy magazine.   Okay, so it did not make sense to me either, and that serial here becomes an under-200-page tale that reads like a rejected script for Miami Vice.   The dialogue reads a lot like a middle-schooler’s first attempt at writing.   But then, some may find this sample fascinating:  “You know where he lives, right?”  “Yes.”  “Fine.   I said we had ten percent of a plan.   It’s more like two percent.   I gotta get some smokes.”

Sometimes less is more.   In this case, less is less.   And, oh yes, there are a number of characters who you just know from the first few pages are going to fight it out at the end of this not-at-all-disguised shaggy dog story.

Is this Johnson’s idea of a $23 practical joke?   I don’t know, but let’s just hope that Playboy paid him a Ferrari’s trunk full of money, because recovering from this is going to be a long shot.   Bang!