This is a collection of twenty-six short stories written by Jay McInerney over twenty-six years, from 1982 to 2008.   Sad to say, I simply do not understand the quality differences in his writing.

This grouping starts off with the brilliant drug-induced piece, “It’s Six A.M. – Do You Know Where You Are?” which became the base for the well-known novel and screenplay Bright Lights, Big City.   Unfortunately, the other stories that follow dim by comparison.

“Smoke” is a Roald Dahl-ish piece in which nothing is as it seems.   “Invisible Fences” is a crude sex tale that might have been written for a men’s magazine twenty to forty years ago.   “The Madonna of Turkey Season,” about a family’s travails made worse by holiday gatherings, reads like Joan Didion but without her charm or cool, laser-like, focus.   Except for “It’s Six A.M.” we never, in fact, feel the presence of a human narrator.

Based on his reputation and/or press clippings, McInerney is the next great American writer; a fact that is not easy to see in these twenty-six tales.   Rather, How it Ended reads quite like a career-spanning collection of the music of the Doors, complete with a brilliant start, weak middle, and middling finish. 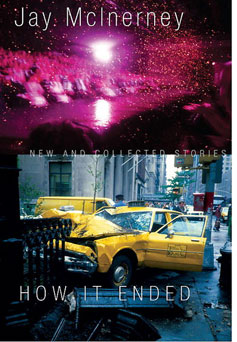 One response to “How It Ended”