A Tour of American Chinatowns 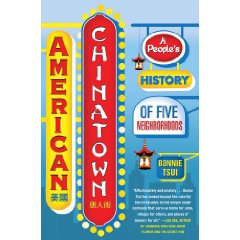 A book about visiting five American Chinatowns sounds like a fascinating idea: however, the writing in Bonnie Tsui’s book – labeled American Chinatown (singular) – does not seem to have met its potential.   Tsui visits the Chinatowns of San Francisco, Los Angeles, Las Vegas, New York City and Honolulu (Sacramento is not included).   She does a great job of writing about San Francisco and Honolulu with just the right combination of factual information and human interest stories.   The segments on the other three Chinatowns fall short.   They read a bit too breezy, as though written for an airline magazine, or Sunset.

There’s also a problem in that one basic premise is stated too often:  Chinatowns are places to grow up in, places to leave and places to which one may wish to return later.   These neighborhoods are both ethnic villages and tourist traps.   Further, in preserving a particular culture and lifestyle (at a particular point in time), they may become separatist enclaves, something that troubles the author.

This reader would have liked a comparison among these Chinatowns and other ethnic communities, such as Japantown and Koreatown in L.A., and Solvang.   As it is, this book comes off a bit flat, like a Chinese meal served without fortune cookies.