For Haruki Murakami the solitude that running brings “is a pretty wonderful thing.”   Murakami – who lives in Tokyo and annually lectures in Cambridge, Massachusetts – wrote this series of essays while preparing for the New York City Marathon.   His goal was to answer the question often asked of runners, “What do you think about when you run?”   The answer, for Murakami, is nothing:  “I’m not thinking of a thing…   (I) keep on running in my own cozy, homemade void, my own nostalgic silence.”

But Murakami finds that running, like the art of writing each day, is something difficult and exhausting that makes him stronger.   By his own admission (“…is it ever possible for a professional writer to be liked by people?”) the loneliness of the long-distance runner and of the writer appears to be one and the same.

This “memoir”, though, is not really a collection of essays about the sport of running.   Running is just the hook.   Like the writings from the late Dr. George Sheehan (Running and Being, This Running Life), this is actually a book about personal philosophy, comfort and self-esteem.   Murakami shows us that we must enjoy our lives in our own way, meeting our own needs even if this displeases others.   In his case, he turns down social obligations and dinner invitations in order to write and run and plan his lectures.   What could be better?

Haruki also addresses the need to gracefully accept the aging process.   “It might not be a very enjoyable process, and what I discover might not be all that pleasant.   But what choice do I have anyway?” 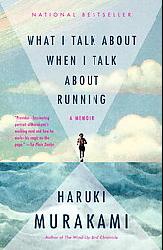 The writer’s style is so engaging – and here’s another parallel with Dr. Sheehan – because of his humbleness and self-deprecation.   This is a Japanese citizen who lectures at Harvard but says of himself, “I’m not the brightest person.”   He’s also a tremendously successful writer who does not expect to be adored, “…I just can’t picture someone liking me on a personal level.”   But Murakami has a wife who loves and accepts him even as she wonders why he runs slower each year.

Yes, Murakami is a brilliant, quirky man who in 180 pages demonstrates for us the value of living on our own terms, with self-acceptance – despite our admitted flaws and limitations – being key.   The reader need not concur with everything Murakami writes but, in the end, you will learn to grant him the respect he has granted to himself.

“Long distance running has molded me into the person I am today…  I’m hoping it will remain a part of my life for as long as possible.   I’ll be happy if running and I can grow old together.”   Long life!