The Long Snapper would be a charming true story except that we’ve read and seen it before.   In the book and film version of The Rookie (Dennis Quaid starred in the movie), we were told the true story of Jim Morris, a professional baseball player who becomes a school teacher when his athletic career is over.   Years pass before he’s suddenly contacted by the Tampa Bay Devil Rays, who want him to try out for a pitching opening.   He’s undecided but his students encourage him to take the try-out, and this “rookie” returns to “the Show.”

Take the exact same story and substitute the football player Brian Kitchen for Morris and you have The Long Snapper.   Kinchen played pro football for 12 years before losing his job and becoming a school teacher.   Two years pass and then guess what?   Oh, yes, the same thing that happened in The Rookie.   Except that Kinchen is invited to try out for a team that’s two wins away from the Super Bowl. 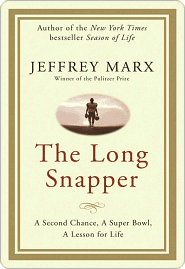 You can probably guess what the ending is going to be.   Does our hero come through in the Big Game?   The climax will only surprise those who haven’t seen Hoosiers, The Bad News Bears, Invincible or Remember the Titans.

One response to “Another Rookie”