Thirteen is not an unlucky number for author Charles Todd (actually the mother/son writing team of Caroline and Charles Todd).   A Lonely Death is, of course, the thirteenth mystery in the Inspector Ian Rutledge series.   Although the series has been in publication since 1998, this is a first read for this reviewer.   A classic blend of personal feelings, intellect and mayhem makes the tale set in the English countryside more than a mystery story.   The period piece in a charming setting enhances the believability of the tale and slows the pace of the story line.   The Todds’ grammar is excellent and their wording is confident without being ostentatious.   There is no doubt of the authors’ intent as they lead the reader along a winding path of discovery.

The story is set in post-World War I England.   The characters’ lives and, in some cases, their bodies have been injured during the Great War.   These men and women base their actions on their underlying motives and class beliefs.   In other words, they are congruent.   Due to the time period, the detecting is more about good old sussing out of details than gimmickry or technological tricks.   Three soldiers are found dead, one after another – similarly posed with a dog tag in the mouth and death by garroting.

This isn’t a page turner – per se; rather, it is an assignment upon which the reader is invited to share with Inspector Rutledge as he traverses England’s countryside.   Solving the crimes takes a backseat to the interactions and power plays among the law enforcement teams investigating the crimes.   Some things never change and the Todds make the point that people are sure to bully and intimidate when control and power are at stake. 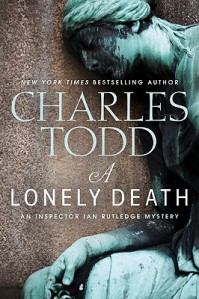