A review of the Mizuno Wave Precision Running Shoe.

The Nike Air Pegasus was the best-selling shoe of the late 1980s and early 90s.   It seemed to have everything going for it, from a slightly curved last that fit most everyone, to a firm polyurethane heel, soft blown rubber up front, and just a smidgen of pronation control.   The exposed air in the heel made runners feel like they were going to run faster, even if it was just a gimmick.

That beloved Pegasus was such a great shoe that I’ve been searching for its replacement ever since.   There are Nike Air Pegasus+ 28 and 29 models out now but there’s not much about them reminiscent of the original.   They offer a bouncy ride that seems to be directed to the youngest runners, and styling that appears to satisfy someone’s odd need for the 70s.

I’ve never been able to wear a pair of Mizuno runners since running stores have not carried my size.   But on my most recent trip to the local emporium, the salesman urged me to try the shoes he runs in, the Mizuno Wave Precision 13.   In this case, 13 is a lucky number!

Apart from the color scheme (more on that later), the Wave Precision comes off as the soulful heir to the “back in the day” Pegasus.   It offers a nice, slightly curved last that will fit most feet – size up a half-size – a firm heel in the back, soft rubber up front, and – perhaps best of all – a minimal helping of stability.   The stability comes from the built-in wave support in the midsole.   It’s just enough to keep your foot straight but not enough to alter your foot strike; as compared to the Nike Zoom Structure+ 15 which pushes back too much.   Like the Pegasus of old, it appears to offer something for everyone, whether they’re heel, mid-foot or front-foot strikers.   (I plead guilty to being a heel striker and I love the firmness of the heel on the Wave Precision 13.)

Are there any flaws with this model?   Yes, perhaps two…  The heel counter that protects the Achilles tendon is a bit firm and you may feel it after a long run; although this confirms that it’s performing its intended purpose.   And then there’s the matter of the colors.   Mizuno calls the standard (and only) color scheme Fluorite/Gypsum/Dress Blue.   It may strike some males as being somewhat feminine.   My wife calls them, “the cartoon shoes”, for which I’ve had no witty comeback.   Let’s just hope that Mizuno provides a restrained option in the future.   I have a feeling that a lot of the owners of the current Wave Precision 13 will be ordering another pair when the new color scheme(s) arrive.

If you’re a runner who can’t afford a time machine to take you back to the late 80s/early 90s – and the joy of running in ye-olde-tyme Pegasus running shoe – you can instead consider springing for a pair of Mizuno Wave Precision 13s.   A splendid time is guaranteed for all!

This article was originally posted on the Blogcritics Sports site at: http://blogcritics.org/sports/article/on-the-run1/ .   These running shoes, which retail for $109.99, were purchased by the reviewer. 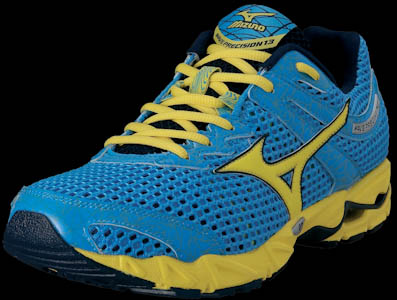 Note: This site will periodically feature reviews of products other than books, although it will remain as primarily a book review blog.