A book that does not quite live up to its subtitle.

“Musicians are the mouthpieces for our age.”

“Musicians are the torchbearers, the spokespersons of our time.”

Jenny Boyd’s (George Harrison’s one-time sister-in-law) book might have been called Conversations Touching Upon Creativity. This is a book in which she quotes numerous musicians, including Harrison and Ringo Starr, about the magical, mystical and mystifying process of creating music. But the book only takes us to the edge of the process and never smack-dab into the middle of it (e.g., the source of creativity). Boyd, in fact, seems unable to define what creativity is or exactly how it works. And the quotes she includes are often contradictory; for example, on the effect of drugs and alcohol – some musicians see these as a boon, others as a bane.

While the book is readable and somewhat entertaining and some of the statements from major musicians are interesting, there’s far too much reliance on lesser figures. Sinead O’Connor, for example, seems to be quoted on about every second or third page. The reader would have been better served if Boyd had focused on a few particular songs or albums and discussed with their creators the steps they took from first thought to finished recording. (Not surprisingly, such books already exist.)

Boyd is caught up with exaggerating the role of modern day musicians, portraying them as societal leaders and major change agents: “Artists are not afraid to break down the old to make way for the new….” Since this is what she clearly and strongly believes, she may wish to consider writing a follow-up book about this thesis. However, this work led me to realize why even Bob Dylan has disdained the role of prophet, socio-political leader or “spokesperson for his generation.” That crown may be too heavy for any musician to wear. 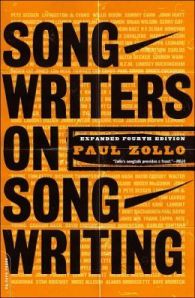 Individuals with a strong interest in the subject of songwriting and creativity may want to read Songwriters on Songwriting: Revised and Expanded by Paul Zollo (Da Capo Press), which covers the topic in 752 pages.