First in the Hearts 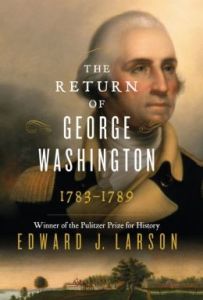 In retrospect, Washington’s ascent to the presidency seems so foreordained as to need no explanation. It appeared so at the time as well. Virtually everyone expected it, yet Washington’s closest friends and advisors… felt a need to encourage him.

The Return of George Washington by Edward J. Larson may be a totally accurate account of a significant period in the life of Washington, but I found it to be rather flavorless and colorless. The reader learns how it was that Washington was drafted into accepting the role of this country’s first president, but never gets close to understanding who or what he was as a man, a living person. The Washington presented by Larson is gloomy and pessimistic and anguished; writing that he saw “nothing but clouds and darkness before me” in serving as president. Others have painted a portrait of a man who was quite intelligent, cunning and ambitious. He was certainly nothing if not courageous, leading a rag-tag volunteer army against what was then the most powerful nation on earth.

This account contains a few typos that will hopefully be corrected in the trade paper version. Larson also relies upon some strange word selections (“proroguing”) that may reflect an overly academic style.

If one has never read a biography of Washington, this is not a bad place to start but it only covers the period after the Revolutionary War through Washington’s death. There are fuller accounts. The strongest section deals with the machinations of the Constitutional Convention. Law students may find it interesting. 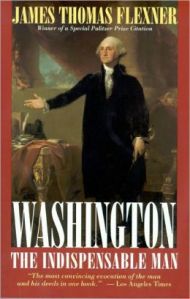 A better choice of a Washington bio fortunately remains in print, Washington: The Indispensable Man by the late James Thomas Flexner (first published in 1974). That account won a National Book Award for biography and a special Pulitzer Prize citation. It is the account of Washington’s life to read; an account that is full, rich, complete and completely convincing when it comes to detailing the greatness of Washington, the man.

Note: The Los Angeles Times labeled Flexner’s biography of Washington, “The most convincing evocation of the man and his deeds in one book.”