A 2013 documentary about an Alabama musical legacy, Muscle Shoals brings to light and life a group of musicians who never had their day in the sun. 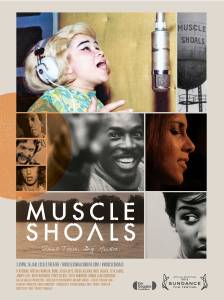 Two iconic recording studios in the tiny town of Muscle Shoals, Alabama – FAME (est. 1959) and its spin-off Muscle Shoals Sound (1960) – became the “must have” sound for, among others, Percy Sledge, Wilson Pickett, Otis Redding, The Rolling Stones, Lynyrd Skynrd, Aretha Franklin, Paul Simon, Boz Scaggs, Bob Dylan, Rod Stewart, Bob Seger, Etta James, and many other legendary Rock-and-Roll artists. The magic of a group of background musicians, who called themselves the “Swampers,” some of whom were classically trained, were the touchstone of FAME. The Swampers were all white (a fact that was to surprise Paul Simon). Keep in mind this is the early 60’s.

Muscle Shoals, which premiered at the Sundance Music Festival in January of 2013, is the love story of America’s music roots in the Deep South. For this viewer, some of the most spellbinding scenes focus on Rick Hall, the pioneer and open-minded founder of FAME studio. Hall’s own poverty and family upheavals allowed him to empathize with the racial hostility young music artists of color faced in most of the United States, not just the south. Before the Civil Rights Movement became a force shaping our country’s history, FAME gave some of our most creative musicians their break in the music business. The film gives the impression that the principals of FAME were unaware of the significance of their race-neutral music production.

Hall was to bring black and white music together. He produced signature music: “I’ll Take You There,” “Brown Sugar,” and “When A Man Loves a Woman”. White studio musicians were to make unknown black artists famous. 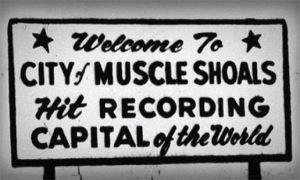 Muscle Shoals bears witness to how Hall’s color-blind passion for music infused a magnetism, mystery, and magic into the music that became known as the Muscle Shoals Sound. The filmmaker allows the key players to speak for themselves, including Mick Jagger, Keith Richards, Aretha Franklin, Paul Simon, and Etta James. On its own, the cinematography of Muscle Shoals, the backwater town along the Tennessee River is an eye opener. And Muscle Shoals is not to be missed for its music history, racial progressiveness, and its imagery. It’s a visceral and magical vision!

1.) The original Muscle Shoals Sound Studios building is listed in on The National Register of Historic Places and maintained by the Muscle Shoals Music Foundation. The foundation’s goal is to turn the historic building into a music museum.

2.) FAME is still owned by Rick Hall and his son Rodney. Beats Electronics, because of this film, is underwriting the renovation of FAME to support young musicians.

3.) Actor Johnny Depp is developing this movie into a TV series, according to Variety.

You can read more from writer, artist and retired Stanford professor Diana Y. Paul at her blog Unhealed Wound: