Such a Hollow Feeling 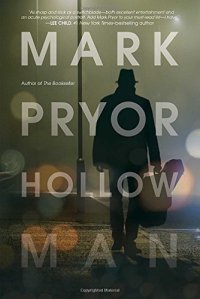 Oh, and it’s a hollow feeling when it comes down to dealing friends. It never ends. “Tequila Sunrise,” by the Eagles

The title of Mark Pryor’s sixth novel and seventh book Hollow Man comes from a T.S. Eliot poem, “The Hollow Men.” This, in and of itself, gives one hope that the book will move beyond a typical crime novel. It does not disappoint. It is part carnage and good guys versus bad guys, but it is also a solid attempt to get inside the mind of the demented and tortured souls who commit these crimes.

Pryor is a native of England and an Assistant District Attorney in Austin, Texas. The book takes place in Austin, and the lead character, Dominic, works in the D.A.’s office and hails from England. Suit yourself if you wish to assume that this is at least in part an autobiographical work, but the author certainly uses his expertise well in chronicling the events of this crime story.

Dominic is unquestionably a psychopath. He is demoted at work and challenged as a plagiarist in the hot Austin music scene. These events affect his ability to control his illness, and – at the first opportunity, he snaps and uses those around him as much to satisfy his perversion as to actually gain anything of consequence for himself. All the while, he demonstrates no concern whatsoever for the well-being of anyone not named Dominic. He presumably rationalizes this as somehow related to the abuse he suffered and endured as a child. Those more informed than I will have to decide if that is in any way relevant or if Dominic was born troubled.

The story is told in the first person, which makes for interesting reading, for as the story unfolds, it is often difficult to truly know the extent to which a specific occurrence is as it appears to be or is a contrived manipulation of a sick mind. In fiction some mysteries are best left unsolved.

Hollow Man offers a solid balance of narrative and dialogue, which is rare for books of this genre. There is an occasional gaffe in the dialogue, but perfection in this arena is hard to pull off for even the most accomplished writers, and – while fair to point out, it does not interfere with the enjoyment of the story or detract from the overall quality of the book. In fact, most readers will be quite interested in learning what comes next and be held in firm suspense until the final pages. It’s extremely hard for an author to accomplish this feat.

Dave Moyer is a public school administrator and is the author of Life and Life Only: A Novel.