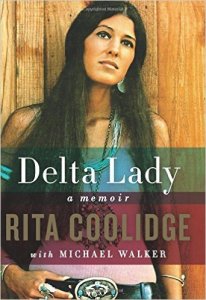 In the Acknowledgments, Rita Coolidge states that from the age of four she “dreamed of writing a book.” Sadly, this memoir does not read as if it was written. It reads as if it was dictated onto audio cassettes and transcribed by the writer whose name is found beneath hers in small letters. There’s simply no voice, no style present that gives it personality; thus, one never feels like time has been spent with the singer-musician.

Coolidge concedes that people usually think of her as the woman who was once married to Kris Kristofferson. Those wishing to find out something about that marriage may be satisfied with what they read in these 219 pages. But those wishing to learn more about her life in or out of the music trade may be left wanting.

One frustrating thing is that Coolidge makes bold statements before walking them back. For example, she’ll state that musician Joe Blow used too much cocaine, and then retract that by saying it’s not for her to say what too much is. Tentativeness in a “tell all” is so unsatisfying.

It seems like Coolidge waited decades to tell her story and then hedged in the telling.

Delta Lady could have used assistance from a strong editor. There are awkward statements and content throughout. For example, at one point we read this about Janis Joplin: “She drank too much than was good for her…” And Coolidge tells us that after her mother died, “I had a gig on the eighteenth and knew she wouldn’t want me to not do that gig.” Ouch!

There’s also noticeable repetition in the account. For example, one particular background singer did some work with the Rolling Stones. So every time her name is mentioned, we’re told – with but one exception – that this woman once sang with the Rolling Stones. These may seem like small points, but they’re not so small when you’ve shelled out $26.00 for a finished work.

Finally, there may be some issues with factual accuracy. Coolidge states that the Mad Dogs and Englishmen tour left Joe Cocker physically and financially impoverished. Other accounts note that Cocker’s poor physical state was due to alcoholism. And the Mad Dogs and Englishmen double-album made Cocker rich. It was the second-best selling album in the U.S. when it was released, and was very likely the best selling recording on college campuses. A&M Records co-founder Jerry Moss stated, “‘The Letter’ (from the Mad Dogs album) was the first hit for Joe… The record went (Top 10) platinum and sold well… That whole group was incredible, and it was an amazing experience – what they did live and on record was magnificent. After that success, we were able to get Joe back in the studio to make more great records.”