Darkness the Color of Snow is Thomas Cobb’s fourth novel. Most known for his 1987 debut, Crazy Heart, for which Jeff Bridges won the Academy Award for Best Actor in the 2009 film adaptation, Cobb has paced his output. He’s released a collection of short stories along with two other novels.

Darkness is quite good. Ronny Forbert, a young policeman and a reclamation project of the police chief, Gordy Hawkins, becomes mired in a traffic stop gone bad. In a rural northeastern town, Ronny pulls over a car on a rural road in the middle of winter. The car is full of drunk and uncooperative townies, who ironically happen to be his old running buddies. (If the story took place in the south, one would characterize the local malcontents as “rednecks.” As it takes place in the north, I suppose “ignorant losers” will do.)

When ringleader Matt Laferiere becomes uncooperative, Forbert decides to arrest him and, failing to call for backup, the story takes off. During the resulting fracas, Matt becomes the victim of a hit and run, and many of the characters are swallowed up in the sad reality of American small town politics. Complicating things further is the fact that Forbert is dating Laferiere’s former girlfriend.

The writing is strong throughout. The telling inspires confidence from the outset, though the blunder that sets the story in motion (the failure to call for backup) was obvious initially even to someone – like me, who has no law enforcement background or an inherent passion for crime novels. It is a bit of a distraction when Cobb alternates between the present and the past to provide context and texture to the events and characters. While this does not ultimately interfere with the reader’s overall pleasure, it comes to mind that perhaps the middle third of the novel could have been handled in a more effective manner. 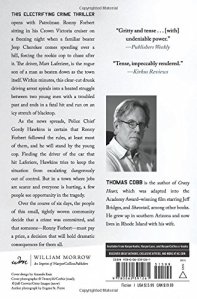 Even the impeccable credentials of Police Chief Hawkins and the integrity of some local officials cannot stop the vicious spiral of events that have been set in motion. As one who deals with local politics on a daily basis and has experienced the bizarre on a first hand basis, I found this story to be many things. It is, plain and simply, a good book. To me, it also serves as a cautionary tale of how democracy is not always everything it is cracked up to be, despite the fact that there is no better substitute.

The trade paperback version of Darkness the Color of Snow was released on August 16, 2016.

Dave Moyer is a public school superintendent in the greater Chicago area, and is the author of Life and Life Only: A Novel.