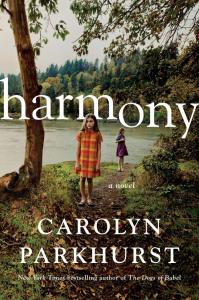 In 2003, I purchased and read the then-new novel The Dogs of Babel by Carolyn Parkhurst. I found it to be strange, engaging and more than a bit troubling. Years later I received a review copy of The Nobodies Album, a novel that I found to be flat and dry the first time I read it. For some reason, I later elected to read Nobodies a second time and enjoyed it once I realized that Parkhurst was channeling the cool, icy style of Joan Didion.

And so we come to Harmony, the latest novel from Parkhurst. The first thing I will note is that it’s more Babel-like than Nobodies. Basically, the author has decided to write a giant curveball of a story. Trust me, it’s not what you think it is.

In Nobodies Parkhurst took us into the world of professional musicians. Like a musician, she uses tension to a great extent in Harmony – such a calming title for a tense work, setting us up for what we believe will be discomfort and pain before relief.

We’re not ordinary people anymore. As far as the whole world is concerned, you’re all members of a cult. And me? I’m your leader, I’m your Jim Jones.

In this story, Alexandra Hammond is a mother in Washington, D.C. facing significant difficulties in managing her autistic daughter Tilly. Her husband Josh and her other daughter, Iris, are also highly affected by the situations created by the brilliant, yet socially inept Tilly. Finally, Alexandra finds a savior of sorts, a not-quite psychologist/teacher by the name of Scott Bean. Bean proposes to set up Camp Harmony in the wilds of New Hampshire, a place of refuge and healing for families with unique, difficult (never “special”) children.

It turns out, naturally, that Mr. Bean may be anything but stable himself.

The good news about Harmony is that there are stretches where Parkhurst hits her stride in writing well:

Happiness, as it exists in the world – as opposed to those artificially constructed moments like weddings and birthday parties, where it’s gathered into careful piles – is not smooth. Happiness in the real world is mostly just resilience and a willingness to arch oneself toward optimism. To believe that people are more good than bad. To believe that the waves carrying you are neither friendly nor malicious, and to know that you’re less likely to drown if you stop struggling against them.

But the fine writing is more or less wasted in a tale that’s clever, clever, clever and clever. In the words of a college professor, “This is too clever by half.” Even worse, when Parkhurst reaches the natural ending of the story she refuses to let it lie. Instead, she adds on an “epilogue” that stands alone. It’s unrealistic and calls to mind the magic-centered writing of Audrey Niffenegger (Her Fearful Symmetry).

It’s quite likely that Parkhurst has it in her to write a Niffenegger-style story of hope and deliverance. But this is not that story.

This review was first posted on the Blogcritics site: