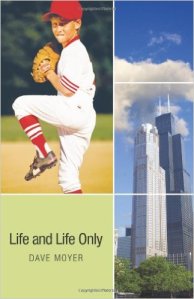 Because I like baseball (having written a baseball novel), have endured martial strife, and am a father (all major themes in Dave Moyer’s novel), I enjoyed reading Life and Life Only. It details Dan Mason’s life from his birth in 1974 to his early-forties in the future year of 2018. Incidentally, the book was published by iUniverse, Inc., in 2009, nine years before the story ends.

An abundance of facts are presented as the novel primarily follows the baseball career of talented pitcher, Dan. We accompany him through youth, high school, summer, college and semi-pro baseball as he seeks his dream of playing professional and eventually major league baseball. Unfortunately an arm injury undermines that dream. Baseball also is an important part of his marriage to the lovely Southern belle, Anna Jean, and even permeates, in a positive way, his excellent relationship with his only child, Melinda Sue.

The novel does have its shortcomings, however. The interspersing of historical details and the music of Bob Dylan aside, it has, as I mentioned, an abundance of facts. And Moyer often presents these facts randomly, and sometimes in a helter skelter manner, frequently changing point of view in the process. Such a voluminous number of facts ultimately sacrifices the drama inherent in Life and Life Only. Moyer regularly violates the important writers’ adage of “Tell, don’t show.” Thus he keeps the reader at a distance instead of inviting him into each scene.

Even with the novel ending some nine years after publication, it seems very autobiographical. Not that there is anything wrong with that. I simply mention it because a little poetic license might well heighten drama. 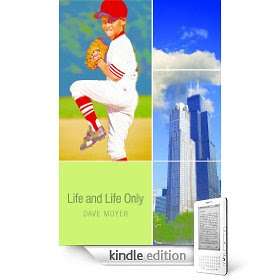 Again, I enjoyed the book. I am sure I would have found it more compelling with fewer facts and more drama.

Alan Mindell is the author of The Closer: A Baseball Love Story, and The B Team: A Horse Racing Saga.

Dave Moyer is an education administrator in the greater Chicago area, author, and a reviewer for this site.

First in the Hearts

In retrospect, Washington’s ascent to the presidency seems so foreordained as to need no explanation. It appeared so at the time as well. Virtually everyone expected it, yet Washington’s closest friends and advisors… felt a need to encourage him.

The Return of George Washington by Edward J. Larson may be a totally accurate account of a significant period in the life of Washington, but I found it to be rather flavorless and colorless. The reader learns how it was that Washington was drafted into accepting the role of this country’s first president, but never gets close to understanding who or what he was as a man, a living person. The Washington presented by Larson is gloomy and pessimistic and anguished; writing that he saw “nothing but clouds and darkness before me” in serving as president. Others have painted a portrait of a man who was quite intelligent, cunning and ambitious. He was certainly nothing if not courageous, leading a rag-tag volunteer army against what was then the most powerful nation on earth.

This account contains a few typos that will hopefully be corrected in the trade paper version. Larson also relies upon some strange word selections (“proroguing”) that may reflect an overly academic style.

If one has never read a biography of Washington, this is not a bad place to start but it only covers the period after the Revolutionary War through Washington’s death. There are fuller accounts. The strongest section deals with the machinations of the Constitutional Convention. Law students may find it interesting.

A better choice of a Washington bio fortunately remains in print, Washington: The Indispensable Man by the late James Thomas Flexner (first published in 1974). That account won a National Book Award for biography and a special Pulitzer Prize citation. It is the account of Washington’s life to read; an account that is full, rich, complete and completely convincing when it comes to detailing the greatness of Washington, the man.

Note: The Los Angeles Times labeled Flexner’s biography of Washington, “The most convincing evocation of the man and his deeds in one book.”

One of Us Must Know (Sooner or Later)

Bob Dylan is a performing artist – a traveling bluesman, a modern-day minstrel – and the best way to try to access his art is to see him perform live.   Reading the lyrics, even listening to the records just does not do the man justice.   In The Ballad of Bob Dylan, Daniel Mark Epstein does what few have been able to do at all, much less do well – capture that spirit and, in doing so, somehow manages to get closer to the essence of an American icon.

Epstein explores Mr. Dylan through the lens of four concerts spanning 46 (yes, you read it correctly, 46!) years.   Beginning with the Lisner Auditorium in Washington, D.C., December 14, 1963; moving to Madison Square Garden, 1974; then to Tanglewood, 1997; and, finally, ending with Aberdeen, 2009, the author invites the reader into the endless iterations and reincarnations of the man who, by Dylan’s account “doesn’t do folk-rock” and is “just a guitar player.”   Epstein tells of a Hibbing, Minnesota, Jewish boy obsessed with American roots music.   He explores the inner workings of a young man who locks himself in his room listening to far away radio stations – a teenager enamored with Little Richard and Buddy Holly.

Epstein takes the reader on an improbable journey in which this same person, later in his life, converts to Christianity and – for nearly three years from 1979-1981 – almost exclusively performs music from his three religious albums, regularly using the stage as a pulpit.   Epstein describes a man so distraught that in 1987, after years of going through the motions and hiding behind back-up singers, concludes that retirement from live performances is his only option.

At this point, Epstein alludes to a turning point in Dylan’s career familiar to many of his fans.   On October 5, 1987, in Locarno, Switzerland, Dylan, petrified, needing to take the stage on the verge of a panic attack, indicated that he heard a voice, and a revelation occurred to him.   “I’m determined to stand, whether God will deliver me or not.   And all of a  sudden everything just exploded in every which way.   After that is when I sort of knew:  I’ve got to go out and play these songs.   That’s just what I must do.”

This moment is likely the birth of what has become known as “The Never Ending Tour”, a tour that Dylan claims has ended, but to which the author refers in an effort to describe Dylan’s continual need to perform well over 100 shows per year.   Epstein describes Tanglewood as the 880th show of the tour.   Specifics aside, Dylan has kept up this pace ever since.   He has played in front of a couple of thousand people or less; he has played to sold-out arenas; he has played summer shows in amphitheaters to crowds of 20,000-plus; he has played ballparks and college campuses; he has played in front of crowds that have enthusiastically embraced him, as well as several who have walked out on him.   But keep playing, he has.

As Epstein relates, Dylan wanted to take his music to a new audience without preconceived ideas of what it was supposed to sound like.   In so doing, Dylan essentially recreates his music on a nightly basis.

Moving from concert to concert, Epstein recounts various stages of Dylan’s career.   Many of these stories can be found elsewhere.   However, the perspective is unique, and there’s ample and interesting new ground.   The best example of this is Chapter 12, in which the author goes to great lengths describing the impact drummer David Kemper had on the band during his 509 shows (1996-2001).   It is probably no coincidence that this is the era in which Dylan reconnected with the masses.

Another interesting tidbit is Epstein’s account of when Larry Campbell replaced John Jackson on lead guitar.   Upon arrival, Campbell had to learn Dylan’s songbook, yet during the rehearsals prior to his first tour, the band almost exclusively played covers from the traditional American songbook.   Rarely did they ever rehearse anything.   Dylan wanted things raw and spontaneous and created an environment to ensure it.

There are a great many other nuggets in this book, and Epstein’s bright ability to capture the essence of Dylan’s commitment to performing live is unique.   Paul Williams wrote three books entitled Bob Dylan Performing Artist, which consider work from different eras of Dylan’s career, but Esptein – for reasons that will become apparent to the reader – does a better job than most at providing the context of why this discussion is worth having in the first place.

Dave Moyer is the author of a novel about baseball, family and Bob Dylan entitled Life and Life Only.   He has seen Bob Dylan perform live twenty-nine (yes, 29!) times over the years and decades; however, Mr. Moyer has never played his drums for Mr. Dylan.