I never bother locking the house in this kind of heat.   It we shut the windows we’ll never sleep.

Gunapan is a made-up name for a town in Australia situated within driving distance of Melbourne.   Author P. A. O’Reilly brings her reader into hot, dusty inland Australia with the sights, sounds and textures of rural life.   A seven-year drought has produced a landscape that begs to be soothed by rain.   Moreover, numerous ladies of the town have been deserted by their husbands, leaving them to care for the children.

Loretta Boskovic, the main character, is struggling at a low paying job to support her daughter Melissa and son Jake in the wake of husband Tony’s departure several years ago.   Norm, who owns the town junk yard, is Loretta’s best friend and confidante.   There are the usual class distinctions as wealthy land owners living nearby flaunt their leisure and luxuries.   They magnify the disparity between themselves and the ordinary folks in Gunapan.

The Fine Color of Rust is an engaging tale of persistence, friendship and commitment.   Loretta is a heroine who draws from her inner strength to fight the closure of Halstead Primary, the local school.   Her poverty in no way diminishes the quality of her efforts as she seeks to persuade local and central government officials to keep Gunapan’s school.   Melissa and Jake are vulnerable kids who long for their dad’s return to the family.

Be prepared to really care about the best characters in this story as each one is portrayed in-depth for the reader.   Although this is a novel, there are a few small mysteries that run like underground streams throughout.   Rather than propel the plot, they add dimension and motivation for Loretta as she follows her passion to keep Halstead Elementary from closing.

Readers of Sophie Littlefield’s A Bad Day for… series will enjoy this change of scenery. 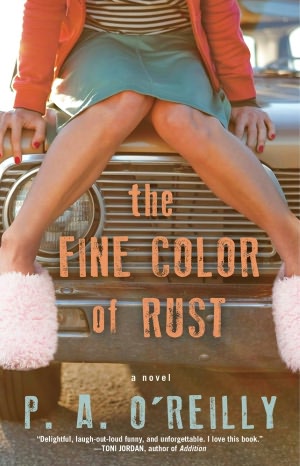 A review copy was provided by the publisher.  “…a story about love, where we look for it, what we do with it, and how it shows up in the most unexpected places.”   Big Issue, Australia

Note:  Chook Lit (a bit like Chick Lit) is a slang term used in Australia to describe stories set in the Outback and/or those depicting the gritty realities of life in the rural areas of the Land Down Under. 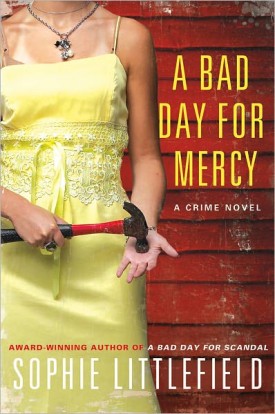 Stella Hardesty rides again!   Author Sophie Littlefield certainly has a talent for creating fresh and amusing mystery novels.   There’s a bit of down home in her main character, Stella Hardesty.   Her would-be boyfriend, Sheriff “Goat” Jones, makes a mighty fine love interest for followers of this series.   Stella’s friends and neighbors, mostly the ladies, come to her when husbands or boyfriends need a bit of attitude adjustment.

Usually, this reviewer would not read two books back-to-back that were written by the same author.   Well, breaking rules can be a whole bunch of fun.   Scandal and Mercy are the latest in the series.   They were preceded by Sorry and Pretty.   Each book can stand on its own merits; however, there’s much to be gained by starting with the first book for readers who are new to Ms. Littlefield’s writing.

“This here’s the hospital,” Chip said, as they arrived in front of an imposing clot of buildings featuring a big square limestone main structure and any number of added-on bits in a variety of architectural styles, making the whole thing look like a LEGO set designed by a drunk and hostile modernist.”

The presenting challenge might be rescuing her sister’s stepson from creditors who are seeking repayment for gambling debts, or a snotty former classmate of Stella’s who needs assistance with disposing of a dead body.   Stella does not shrink from a formidable opponent or smelly situation.   These characters are not the ones you’ll find in a British mystery – proper and polished; however, the lessons learned as the mystery is solved are every bit as meaningful and undoubtedly more poignant.

A Bad Day for Sorry

This crime novel is a tale of vengeance sought by Stella Hardesty for her clients, women who have suffered abuse at the hands of their husbands or boyfriends.   The setting is present-day rural Missouri.   Stella’s clients are locals as well as women from neighboring states.   The story might take place nearly anywhere in the U.S. as domestic violence occurs in relationships when a bad attitude and a lack of respect for others combine with low impulse control.   Perpetrators and victims come in all sizes, races and backgrounds, regardless of economic circumstances. 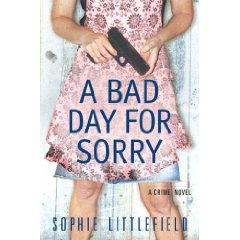 Stella and Chrissy Shaw, a young woman who is the victim of physical abuse and the mother of an 18-month-old boy, form an unlikely team that sets out to take care of business when Chrissy’s child is kidnapped.   They begin their mission in a business relationship and grow it into a strong and respectful friendship.

Stella is fifty and she prides herself on being alert, observant and willing to wade into a dangerous situation.   She works out, practices martial arts and carries weapons of all types.   Knowing one’s own strengths and assets can be powerful.   In the midst of a tense situation, one of many in this book, Stella says to a perpetrator, “You know what your mistake was, you hesitated.   You thought you had me because you’re young.   But badass comes in all ages.”

Bad Day is not for the faint of heart.   But it is quite funny, offering the humor that comes with justifiable vindictiveness against those who have harmed us.   Sophie Littlefield likely had a great time putting together this well written, tongue-in-cheek, story.   The author’s photograph is of someone who appears to be far more innocent than the characters in her tale.   (Author Littlefield lives near San Francisco.)