A Question of Balance 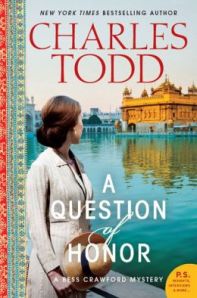 The 2013 installment of the Bess Crawford saga draws readers back to India in 1908 for the plot-setting incident. Bess grew up in colonial India where her father, Colonel Crawford, commanded a regiment. One of his officers was identified as a murderer; however, the fellow was presumed dead before he could be captured and tried for his crime. The regimental honor was sullied and the memory of the evil deed followed the men for years.

The secondary plot threads concern the perils faced by British citizens whose children were shipped back home due to sickness and the tensions between the British and local warring tribes in the early 1900s. Fast forward ten years to 1918 and we encounter Bess serving as a nurse on the battlefields of France. She is, as always, plucky and strong willed. Her eyes and ears gather information from the wounded as she carriers out her duties. One fellow in particular confides in her regarding the presumed dead murderer from her father’s regiment, thus sparking Bess to action. The regimental honor is family business!

The tale unfolds across Europe from this multi-level beginning. The book seems to be more Bess’ journal than a mystery novel. The narrative is a bit bouncy which may be due in part to the advance reader’s edition on which this review is based. There is an interesting contrast in perspective for fans of the authors, the mother-son duo who write under the pen name of Charles Todd. The Ian Rutledge series focuses on the post-war personal fallout for a male World War I officer; whereas, the Bess Crawford series details the ways in which women were expected to be brave and serve their country in time of battle and yet maintain their modesty. That’s quite a challenge. 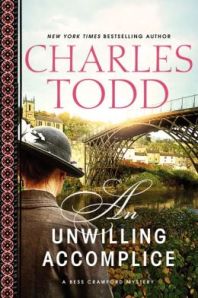 This year’s Bess Crawford tale segues smoothly from the one reviewed above. There is an even pace to the telling as the reader learns of Bess’ experiences behind the battle lines in France. As the book begins, Bess is home in England on leave and planning to rest. A messenger delivers an order regarding a badly wounded soldier who has requested that she accompany him to Buckingham Palace. Bess must accept the assignment and forego her rest.

The soldier, Sergeant Jason Wilkins, is to receive a medal from the king. Social mores dictate that Bess restrict her care to checking in on Sergeant Wilkins and tending to his bandages. At no time is she to stay in his London hotel room. The evening after the ceremony, Sergeant-Major Simon Brandon (known to fans in past mysteries) meets her for dinner in the hotel dining room. All seems well until the next morning when Bess goes to ready Sergeant Wilkins for his trip out of London. Wilkins’ bed is empty and he is missing!

The Army and the Nursing Service blame Bess. Her spotless record of service is now tainted and she is placed on administrative leave pending a review of the matter. That’s all she needs to spur her to find the vanished soldier and clear her good name. Simon assists Bess in her quest whenever he is between covert assignments.

The complex plot line is at times confusing. There are miles of back and forth driving in the English countryside chasing the elusive Wilkins. The search occurs among three small towns. A map of the vicinity would be helpful. This review is based on an advance reader’s edition. Hopefully, the final published version will include a map. One other matter is confusing – Bess and Simon are devoted friends and their relationship seems oddly platonic. Perhaps his military rank relegates him to only being a buddy?

Review copies were received from the publisher. An Unwilling Accomplice was released on August 12, 2014.