Tag Archives: a book review by Joseph Arellano: Outside the Lines

He thought he could white-knuckle his way through to normalcy.   He thought he could do it without the meds.   He couldn’t decide which was worse – life on the meds or life off of them.   He concluded it was just life he couldn’t bear.   The simple act of breathing had become too much to bear.

Amy Hatvany’s fourth novel is an engaging and provocative look at mental illness.   Eden is a 10-year-old girl whose artist father leaves her and her mother behind in Seattle after he’s attempted suicide and refused to take the medications needed to “silence the rumblings in his head.”   The adult Eden achieves her dream of becoming a successful chef in the city, but realizes that she needs to find her father before it’s too late.

I’m not usually a fan of stories that are told in non-chronological order – they tend to be too clever by half – but here the author makes it work, and work well.   In fact, some of her time-shifts seem to have been crafted for a screenplay version of the story.   Hatvany has a gift for dialogue, although in Outside the Lines she’s created a character in Jack (Eden’s charitable boyfriend) who’s just too good to be true.

“Is he perfect all the time?” Georgia asked when I went on dreamingly about some wonderful thing Jack had said or done.   “I might have to hurl if he is.”

While the family novel’s set in The Emerald City, there are side trips to San Francisco and Portland which provide changes of scenery.   This is a morality play in which Eden (as in the Garden of…) must save her long-lost dad before she can save herself and the world she lives in.

“Hatvany’s novel explores the tragedy of a mind gone awry, a tangled bond of father and daughter, and the way hope and love sustain us.”   Caroline Leavitt, author of Pictures of You

“I finally felt like I was contributing to something that made a difference in the world.” 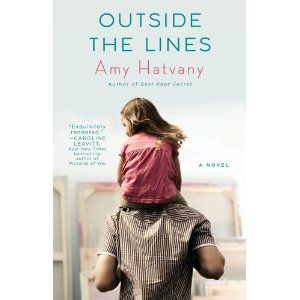