Tag Archives: a book review by Ruta Arellano: In a Strange City

Fans of Laura Lippman need no introduction to private investigator Tess Monaghan. Mystery fans that have yet to read these wonderful books, listen up! Tess is a one-woman force of nature – half Irish, half Jewish, and a Baltimore native through and through. (William Morrow has just re-released the Tess books in new trade paperback editions.)

The connection between Edgar Allan Poe and Baltimore, the city where he died, is the jumping off point for this, the sixth book in the Tess Monaghan series. John P. Kennedy, an eccentric antiques dealer, asks Tess to find out the identity of a mystery man – a cloaked figure that delivers three roses and a half bottle of cognac at Poe’s grave on the anniversary of the poet’s birth. The cloaked man has apparently duped the antiques dealer by selling him a fake.

Naturally, Tess allows her curiosity to get the better of her and places herself in harm’s way by staking out the gravesite waiting for the action to begin. Rather than the customary figure making the gesture, there appears a second cloaked man. The second man shoots the first and escapes! This is too much for Tess and, as is her habit, she works the case even when her client disappears. 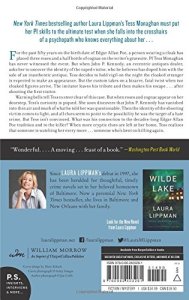 Author Lippman takes some literary license with the name John P. Kennedy. Kennedy was, in real life, a wealthy man from Baltimore who assisted Poe with his writing career. Readers will become steeped in Baltimore’s culture, or lack thereof as she takes every opportunity to ensure an immersion experience.

Tess gets off to a bad start with prospective client, Mark Rubin, an orthodox Jew, whose wife has disappeared with their three young children. Rubin, a furrier who inherited the business from his father, fervently believes that he has had an ideal marriage and is clueless as to the reason behind his family’s disappearance.

This time around, in the eighth book of the series, Tess’ work takes her outside Baltimore via a network of kindred spirits, female detectives who have formed an online assistance network. Rather than a Baltimore-centric story, By a Spider’s Thread focuses on what it means to be part of a Jewish family. Author Lippman provides a serious look at what happens in a family when lies and trickery put everyone at risk of loosing everything, including their lives.

Laura Lippman’s background as a newspaper journalist serves her well in crafting a tale wherein Tess is hired to teach the unseasoned reporters at the Beacon-Light, the Baltimore daily, on how to conduct an investigation for a story. A federal prosecutor’s unsolved homicide is the focus of her first assignment.

Happily, the story – the tenth in the Tess Monaghan series – opens with a narrative from Edgar “Crow” Ransome who has been Tess’ boyfriend for some time now; although, not without a previous break in their relationship. Crow is younger than Tess, a free spirit who volunteers his time and effort at the East Side Soup Kitchen when he’s not booking music groups for the bar where he works for pay.

This installment of the series expands Crow’s appearances and brings with him a new relationship. Crow befriends a young fellow named Lloyd who lives on the street and primarily survives by his wits. Never mind that one of the tires on Tess’ vehicle is punctured while Crow has it on the wrong side of town while assisting at the soup kitchen. One thing leads to another resulting in the Beacon-Light training assignment crossing over into the world that Lloyd inhabits.

Ms. Lippman gives her readers an in-depth exposure to life on the streets in Baltimore, which is difficult at best and downright deadly when the wrong groups of denizens converge. Add in the discussion of racial bias prevalent throughout the city, and it’s obvious this series is more than homage to Ms. Lippman’s hometown. She is always a reporter, of the honest variety.

All three books are highly recommended.