Tag Archives: A Friend of the Family

Friend of the family

First the positives.   A Friend of the Family, a novel by Lauren Grodstein, tells quite an intriguing story.   This is a tale about a doctor who, through a minor omission on his part, lets a patient of his die from an undiagnosed condition.   The pulling of this thread causes the fabric of his previously secure and comfortable life to come apart; the set up has parallels to Carol Cassella’s fine novel Oxygen.   In this case, the physician is a male in his early fifties and Grodstein does a quite commendable job of getting us to believe the man’s voice (sometimes not the case with female authors).

The plot line would have been fine for a medical-legal drama…   Dr. Pete Dizinoff has made a mistake that threatens a reputation it has taken him a lifetime to build.   His best friend, a medical specialist, is not only aware of Dr. Dizinoff’s error, he in fact urged him to order a test that might have saved the life of his young woman patient.   Will his friend protect him or turn on him?

Unfortunately, the author fails to be content with this straight forward story line, so subplots are added – the main one being a possible romantic relationship between Dr. Dizinoff’s 20-year-old son and the troubled 30-year-old daughter of his best friend – and things get confusing and hard to follow.   There’s also a debate about the value of life in the suburbs.   Dr. Dizinoff thinks, “Evening in the garden of good and suburban…  Suburbs, man.   I don’t care what anybody says.   It’s the only way to live.”   Yes, the main character is quite satisfied with living in the suburban community of Round Hill.   Contra, the young woman who may be involved with his son says, “Isn’t the whole point of (living in) Round Hill that you can be gone for ten years and not miss a thing?”   But these issues are not the biggest problem with the narrative.

The story told here would likely have been a fascinating one if it had been told in simple chronological order.   Instead, like an overly clever Hollywood film, the story starts in the present, with abrupt (even neck whiplashing) movements to events that happened three, four, thirty and even forty or so years in the past.   Each time a new chapter or sub-chapter begins the reader is forced to ask, “So where are we now?”

I’m not at all sure what’s the supposed appeal of this style of quick-cut and retro-scene storytelling.   I just know and believe that the story got lost in the complexity of its telling.

I considered adding a few comments about what Grodstein’s characters tell us about life, but this time I’ll refrain from doing so.   There are some gems and rewards for the reader, to be sure.   This reader just hopes that the  clearly talented Laura Grodstein keeps it simpler the next time around. 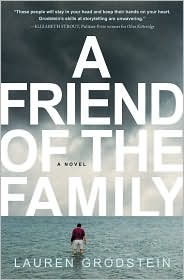 A Friend of the Family will be released by Algonquin Books of Chapel Hill on Tuesday, November 11, 2009.

Thank you to the publisher for providing the review copy.

A review of A Friend of the Family: A Novel by Lauren Grodstein.