Tag Archives: A Puzzle Worth Pondering

A Puzzle Worth Pondering 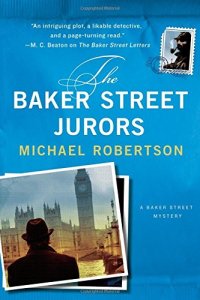 A tall, fiftyish man, clean-shaven, with a thin, aquiline nose stepped into line behind Nigel. “Bloody Hell,” he said, “Is this really the jurors’ queue?”

“I’m afraid so,” said Nigel. “It’s enough to make you want to commit a crime of your own, just to get inside and be warm.”

Author Michael Robertson picks up right where we left off with his fifth installment in the Baker Street Mystery Series. Robertson maintains his crisp sense of humor while delivering a puzzle worth pondering. The books are ideal to take along for a weekend in the country or at the shore. [Or to jury duty!] No need to muddle through the travesty that is the 2016 U.S. election campaign season or the seeming endless reports of man’s inhumanity to man broadcast on CNN. A quick trip to London will be a refreshing change even though it, too, deals with murder, although on a small scale.

Reggie Heath, Queen’s Counsel, and his bride, Laura Rankin, are on an extended honeymoon. Brother Nigel Health has decamped from the U.S. and now makes his home in one of the offices at 221B Baker Street, in Marylebone. An official jury summons is in the morning’s mail; however, the person being summoned is none other than Sherlock Holmes. Nigel makes quick work of fashioning the summons into an airplane and sends it out the open office window toward the street below. His own jury summons is within the stack of mail awaiting him and thus begins another engaging look at the British court system, albeit from the perspective of the jury rather than Reggie’s Queen’s Counsel view.

The jury panel members and alternates, of which Nigel is one, endure unusual circumstances and even great peril as they work their way through the evidence presented by the prosecution in the case against Liam McSweeney, a celebrated cricket player accused of murdering his wife. The book is definitely an homage to Agatha Christie’s And Then There Were None. That’s enough of the plot. No need to spoil the fun. Great fun.