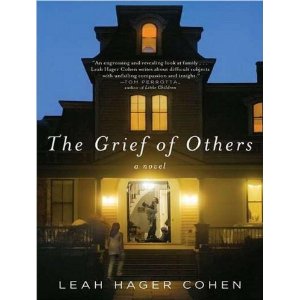 While an author can develop some great sentences and paragraphs in a novel, using language that is either stunningly creative or even gorgeous, it doesn’t mean much if the tale being told does not advance.   In The Grief of Others, a promising and potentially engaging story is overwhelmed by obtuse storytelling.   Because of this, I found the novel to be far more frustrating than pleasing.

The story revolves around Ricky Ryrie, wife and mother of two, who loses a third child (a male) 57 hours after his birth.   The child was diagnosed with Anencephaly four months prior to its birth, a fact that Ricky kept from her husband John.   Since Ricky once had an affair with a work colleague, this raises serious trust issues in the marriage; a marriage which may not survive the tragedy.   Ricky would not let John hold or touch the baby while it was alive, and so he goes on to remind her, “This was my child.  Too.”

But it’s not just Ricky’s story that’s covered here…   We also witness John’s, and those of the children – 13-year-old Paul and 11-year-old Biscuit – and of Jess, John’s daughter by another woman.   And then there’s Gordie, a young man who attaches himself to the Ryries in much the same manner as the troubled young man Kiernan does with the Lathams in Anna Quindlen’s novel Every Last One.

Unfortunately, Cohen’s book does not seem to handle the issue of overwhelming, shattering grief as effectively as Quindlen’s story; nor does it tackle the issues of  marital trust and fidelity quite as well as Commuters, the near brilliant debut novel by Emily Gray Tedrowe.   There may simply be too many characters on the stage here, another one of whom is Will, Gordie’s very sick father.   Cohen seems to have spread herself, and her story, a bit too thin.   Some of the writing is admirable as when John notices that the instant tragedy seems to foster “in everyone around him a sudden, alarming presumption of intimacy.”   (It can be a tad frightening when strangers and coworkers are seemingly a bit too kind and understanding.)

Of all the characters, Ricky’s daughter Biscuit is the one that appears to be the most true-to-life, as if she had been created by Lesley Kagen (Whistling in the Dark, Good Graces); however, the key problem is that the young children Paul and Biscuit are saddled with the thoughts of adults, thoughts that simply don’t seem credible.

Biscuit thinks that, “Her parents seemed like the books you could see (in a bookcase):  they smiled and spoke and dressed and made supper and went off to work and all the other things they were supposed to do, but something, a crucial volume, had slipped down in back and couldn’t be reached.”

Paul, meanwhile, worries that, “(His parents) couldn’t seem to detect anything wrong with each other, never mind that his mother had been silent for most of the past year, or that his father, for all his apparent optimism, was beginning to show fissures.”   How many 13-year-olds would know the meaning of the word fissures, let alone think in such terms?

An intriguing twist – a pregnant Jess lands on the family’s doorstep almost one year after the family’s tragedy of losing the baby – tends to get lost after all this.   This is an almost 400 page novel that feels, in the reading, to be almost twice that long.   At one point, Ricky thinks about her “unbearable helplessness,” and her loneliness in carrying to term a defective child:  “The thought exhausted her.”

This read was something of an exhausting experience. 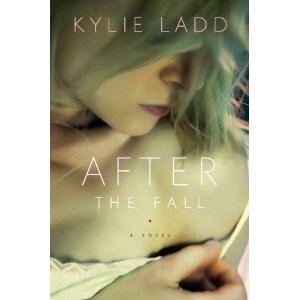 I had been married three years when I fell in love.

Kylie Ladd presents an intriguing story of infidelity told from all sides of an affair in her novel After the Fall.

Energetic, spontaneous Kate has a reliable, loving and dedicated husband, Cary, but senses what she is missing when she becomes intimately involved with her close friend Luke.   Denying and risking the security that their spouses and friends provide, Kate and Luke  continue to manipulate their lives to be together.   But nothing so risky and passionate can last forever…   Or can it?

The tale is presented in the first-person.   Ladd creates a realistic portrayal of how people’s lives are affected by other’s actions and choices, especially when dealing with moral dilemmas such as betrayal and infidelity.   Her characters are presented with depth and the prose is intriguing, captivating and believable.   Ladd delves into the psyche and demonstrates the true-to-life feelings and life changes that can occur in sensitive situations such as the ones provided in her story.

Readers should  not be discouraged by this topic, as there is nothing voyeuristic about this story.   Although the elements of the story are somewhat foreseeable, the story line definitely has elements that are unpredictable, which make it an even more entertaining read.   I was captivated by the characters and so interested in the outcome that I was unable to put the book down.

That’s the thing about falling.   It doesn’t go on indefinitely, and it rarely ends well…  plunge, plummet, pain.   Even if you get straight back up, even when you regain your footing, after the fall nothing is ever quite the same.

A review copy was provided by the publisher.   “…a subtle, moving and perceptive story of love, loss and hope.”   Sydney Morning Herald

A review of After the Fall: A Novel by Kylie Ladd.

“I wondered what he knew about the family; what he didn’t know.   What family he lived in.   My mind wandered around.”

This novel begins with a charming and unique premise.   A young girl, Rose Edelstein, finds that by eating food prepared by others she can taste (experience) the moods and feelings of the preparers.   This has particular relevance when it comes to her mother’s sadness, but later her guilt.   Her mother is having an affair, the knowledge of which Rose wishes she did not possess.

“The guilt in the beef had been like a vector pointing in one direction…  I hated it; the whole thing was like reading her diary against my will.   Many kids, it seemed, would find out that their parents were flawed, messed-up people later in life…  I didn’t appreciate getting to know it all so strong and early.”

This discomfort on the part of our protagonist also affects the reader; at least, it affected this reader.   Rose has been given a power she does not want and it makes her life messy and unpleasant.   At one point, early in the story, she is hospitalized after raving about wanting to get rid of her mouth.   If she didn’t have her mouth in her face, she wouldn’t have to eat and wouldn’t have to feel what others are feeling.

“Over the course of several packed days, I’d tasted my mother’s affairs and had (a) conversation with my father…  I was not feeling good about any of it…”

Rose has a boring attorney father, a brother who isolates and who is soon departing for college, and an unhappy mother who regularly disappears for a couple of hours of errands – which is when she meets her lover.   She lives in a household of people who hardly communicate; people who regularly ask questions of each other that go unanswered.   This also applies to others in Rose’s life.   For example, she asks her Spanish teacher, “How was your weekend?” before her instructor turns away and walks off to roam the aisles of the junior high school classroom.

Aimee Bender’s writing style is clipped; words often appear to be missing from sentences, from paragraphs, from pages.   Maybe the words are missing because, in this imaginary world, humans simply don’t understand each other – relatives or strangers – and, therefore, are not competent about talking, listening, responding.   Perhaps the oddest of all things is that this story is not set in an isolated small town (Mayberry, if you will).   No, it is set in an earlier day Los Angeles, where mega communication was already the order of the day.

There must be an intended message buried somewhere in this 304-page novel that I missed.   After its charming opening pages, Lemon Cake seemed to immediately bog down.   It read more like a novella or an overly extended short story than a true novel.

Perhaps I just don’t have the taste for this recipe.   Lemon Cake left me feeling empty and sad and confused and hungry for something with some heft.