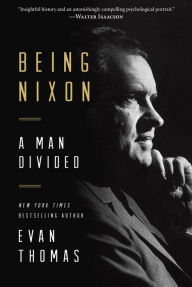 “This is not a book intended to weigh the success and failure of Nixon as a policy maker, and, although the Watergate scandal figures inevitably and prominently, I do not attempt to solve its many mysteries. Rather, I have made an attempt to understand what it was like to actually be Nixon.”

Richard Nixon, as noted in Being Nixon: A Man Divided by Evan Thomas, once said: “Politics would be a hell of a business it it weren’t for the goddamned people.” Thomas, who wrote the exemplary and comprehensive Robert Kennedy: His Life, attempts to get into the head of the only president to resign the office. Seeing the world as Nixon did is likely not possible – as Thomas concedes when he writes, “What Nixon really felt, deep down is unknowable…” But then Thomas makes up for this by stating, “(Nixon) was determined not to worry about being worried.”

Henry Kissinger was to say of Nixon that, “He had a kind of desperate courage.” In Thomas’s view, “Kissinger knew that for Nixon, entering a crowded room or talking to a stranger required an enormous act of will.” In essence, Thomas has drawn up a portrait of a man who – despite being the one-time leader of the Free World, was completely alone.

Thomas does a fine job of explaining the importance of the Alger Hiss case to Nixon’s later political career. The same is true of his detailing of Nixon’s foreign policy achievements. But on Watergate, there’s nothing new here. In terms of fulfilling the book’s stated mission, as quoted above, it fails.

Being Nixon is a sometimes intriguing, sometimes frustrating, read about a man who, quite simply, was utterly unknowable.

Recommended, for those willing to tackle a 600-page biography.

That Was the Year That Was 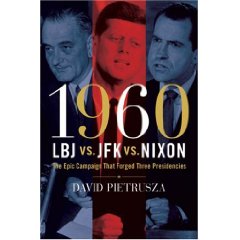 The year 1960 was a monumental one during which this country elected John Kennedy as its president.   But the book 1960 – LBJ vs. JFK vs. Nixon: The Epic Campaign That Forged Three Presidencies illustrates once again that more is less.   Instead of writing a book about President Kennedy, Vice President Johnson or the losing presidential candidate Nixon, David Pietrusza attempts to cover them all at once; as a result more is lost than gained.

One basic problem is that the backgrounds and life events of these three separate large characters in U.S. history (and modern politics) are covered rapidly.   For the reader who has already read full biographies of JFK, LBJ and Richard Nixon, far too much is missed or condensed down to Reader’s Digest style summaries.   On the flip side, the reader who has never read in depth about these figures will likely be unable to comprehend some of what he/she is reading due to the very facts and circumstances that are left out.

I’ll provide an example of the latter problem.   One of the events that made Nixon a major, but young, political figure in the late 1950’s was his involvement in investigating Alger Hiss.   That is mentioned on just two pages in 1960 and what’s missing is an explanation of the key evidence found against Hiss that Nixon relied upon in alleging that Hiss was a Communist and/or a spy (notwithstanding that Hiss worked in the U.S. State Department for Franklin D. Roosevelt and was once the Secretary-General of the United Nations).   There’s no explanation here of the microfilm found in a pumpkin or the typewriter that was supposedly found to have been used by Hiss to commit a forgery.   For the person who is not familiar with Nixon, it will seem that he is credited for “breaking” Hiss but it will be unclear as to exactly why.   Nixon’s role as a prosecutor is hazy without a sufficient review of the evidence he presented against Hiss.

There’s another issue.   The book jacket states:  “Like The Making of the President, 1960 by Theodore White – yet far more revealing than Kennedy camp insider White could ever be…  (it) has the narrative energy and suspenseful turns and twists of a headlong thriller.   Yet it’s all true.”   Well, we actually don’t know today what is and is not true about what is reported as fact in 1960.   For example, there’s an entire chapter – a somewhat odd and silly one – about Kennedy’s relationships with women (“They were a dime a dozen”); and statements about his father and brother Robert.   But these events happened so long ago that we do not, in truth, know what happened and what was alleged or was the product of someone’s imagination.

It’s also not clear what the impact of this information is supposed to be…  Enough said.   But, for me, the biggest fault with 1960 is that I never felt I was getting to know any of the three figures as human beings.   By contrast, Pietrusza shows some surprising skills by including some write-ups of peripheral figures that come off as much more real and human – individuals with true strengths and flaws.   Hubert Humphrey and Nelson Rockefeller are two of the figures who come to life in 1960 in a way that the three lead subjects do not.

Finally, this is just not the suspenseful thriller touted on the book jacket.   For an excellent example of a non-fiction political/modern history book that does read like a Capitol thriller, the interested reader can turn to By His Own Rules: The Ambitions, Successes and Ultimate Failures of Donald Rumsfeld by Bradley Graham.   Rules is an 832-page roller coaster ride that is never dull.   By comparison, 1960 is a 417-page survey that tries to cover the lives of three very large figures at one selected point in U.S. history.   It comes off as simultaneously both too big (focusing on three pivotal lives rather than one) and too small (leaving out too many key details while including a bit too much gossip).   As a result, it simply feels flat in the reading…   But maybe Pietrusza will produce a comprehensive biography of Hubert Horatio Humphrey or Nelson Aldrich Rockefeller; either would – no doubt – be quite interesting.

A review of 1960 – LBJ vs. JFK vs. Nixon: The Epic Campaign That Forged Three Presidents by David Pietrusza.