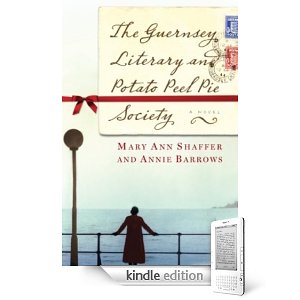 What a delicious read!   I love books with quirky characters and whimsical settings.   This book certainly has those.   Yet it has much, much more.   The Guernsey Literary and Potato Peel Pie Society is a story about human cruelty, hardship, tragedy, triumph against cruelty, and most of all community, love and hope.   The characters are not only quirky, but breathe life into every page of the book.

I want to spend the day with Guernsey’s herbalist-witch, Isola.   I want to go birdwatching and beach combing with Kit and Amelia.   I would like to sit and help Juliet interview the Guernsey Islanders as she tries to understand what it was like to live for five years through the Second World War under German occupation.

I learned much about the hardships of life under occupation and about Guernsey Island.   Previously, I knew what a Guernsey cow looked like, and that it was a “Channel” Island, but I had no idea how close it is to France, nor of its occupation during WW II.   Guernsey is a tiny piece of England that’s off the coast of Normandy (France).

This book is truly, utterly brilliant.   As you may have guessed, the characters are gorgeous, three dimensional friends by the end, and the story has intrigue, romance and loss as you follow the correspondence of Juliet Ashton – an English writer – who is randomly contacted by one of the Guernsey Islanders who’s come to own an old copy of a book that she once owned.   The narrative is told through the ensuing correspondence between Juliet, her friends Sophie and Sidney, and various members of the Guernsey Literary and Potato Peel Pie Society.

The Guernsey Islanders befriend Juliet and slowly reveal how the Society helped them to survive the hardships of war and occupation.   Juliet becomes fascinated with the Society and their efforts to survive and, as a consequence, comes to be deeply involved in their lives.

The sense of community that one gets from reading this book is overwhelming.

The surprising “Englishness” of the book given that the author and her niece (who finished the book after the author’s death) are American needs to be remarked upon.   This book is so well written, so thoroughly researched and lovingly crafted, I was convinced the author was English or had spent a great deal of time in England.   I was, thus, amazed to learn that the writers are Americans.

This is a beautiful, almost ethnographic work of fiction that I won’t hesitate to recommend to others.   It’s a feel good book;  I didn’t want it to end.   As good as chocolate!

This review was written by Amanda.   You can see more of her reviews at http://desertbookchick.com/ .