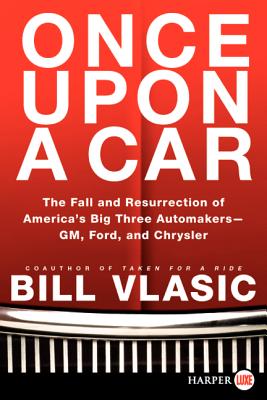 Once Upon a Car: The Fall and Resurrection of America’s Big Three Auto Makers by Bill Vlasic (William Morrow, $26.99, 400 pages)

The Germans couldn’t change their company’s name back to Daimler fast enough.   Chrysler was a bad memory, and the automotive merger of the century a regrettable failure.

In 2005, the Ford Motor Company built 4.8 million cars and trucks, and sold 3.3 million of them.   This meant that 1.5 million sparkling new cars, SUVs, trucks and pick-ups were destroyed.   Such was the prelude to the disaster that fell upon the auto industry when the U.S. economy hit rock-bottom three years later in the summer of 2008.   Ironically, Ford was the manufacturer left standing, while General Motors (GM) and Chrysler came within days and weeks of shutting down operations forever.

How bad was it?   Well, by the end of ’08, GM was losing $60 million every single day.  Instead of buying 16 million cars a year, Americans were purchasing just 10 million.   Gas prices were up, leases were non-existent, and the home mortgage crisis was in full swing.   As Vlasic puts it, “The U.S. car market had imploded.”

GM had made some tough decisions, but it had not made them soon enough.

This is the tale of that implosion caused by faulty leadership and tepid management at two of the Big Three auto firms.   GM was within just weeks of insolvency when Barack Obama took over as president.   Yet GM’s then-chief, Rick Wagoner, “refused to even discuss bankruptcy as an option” and flew on a fancy corporate jet when he first traveled to D.C. to ask the nation’s politicians for a hand-out.   Wagoner’s leadership proved to be so disastrous that the Obama administration made Wagoner’s resignation one of the pre-requisites for federal support.

In its time of need, GM was missing the one attribute that could save it: credibility.

Wagoner was so detached that, “…he left the actual duties of building cars at arm’s length.”   Vlasic, though, not only details Wagoner’s many failings in this “fly on the corporate wall” account, he also takes us through the hopeful marriage and subsequently messy divorce of Daimler-Benz and Chrysler; and he shows us how and why forward-thinking leadership ensured that Ford would survive without needed dollars from American taxpayers.

Did America care enough about the autoworkers to save them?

(The) help was not simply to save GM or Chrysler, but rather to prevent an economic catastrophe on the order of the Great Depression.

Vlasic’s uber-detailed 400 page reporting will leave even the most skeptical reader with a full and fair understanding of why the federal automobile bailout of 2009 was essential; well, anybody not named Mitt Romney.   For years, the Big Three had been operating on razor thin profits (literally, working for cents on the dollar); in ’08 Ford brought in $38 billion in revenue, of which only $100 million remained as profit.   It was a business model that could not last, especially because more than 3 million jobs in the U.S. were tied to the auto industry.

The Big Three had to hit bottom – or avoid doing so, in Ford’s case – and refocus in order to see a future in which American consumers would prefer to drive a Ford Focus rather than a Hummer or Escalade: “It had a special, European-style direct injection turbocharged engine.”   It’s a new day in Detroit and Once Upon a Car tells the story of how we arrived here, for better rather than worse…  And, baby, you can drive my Focus.

A review copy was provided by the publisher.   The reviewer once served on the Ford Motor Company Consumer Advisory Board.

Bill Vlasic is also the co-author of Taken for a Ride: How Daimler-Benz Drove Off With Chrysler (2001).