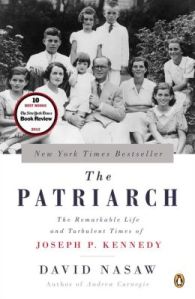 “If this was fiction, no one would believe it,” historian David Nasaw quipped on NPR’s Fresh Air about the extraordinary life of Joseph P. Kennedy, the subject of this biography, which is now available in a trade paperback.

In this 800-page tome [this refers to the hardbound edition], The Patriarch: The Remarkable Life and Turbulent Times of Joseph P. Kennedy, Nasaw, The Graduate Center of the City University of New York’s Arthur M. Schlesinger Professor of History, captured one of the most enigmatic figures of the twentieth century. Although the length of the book might turn away readers, this Shakespearean tale – which was six years in the making – is surprisingly a page-turner. As he did with another larger-than-life twentieth century character, William Randolph Hearst in The Chief, Nasaw goes into depths previously not explored about Kennedy’s strengths and weaknesses.

Nasaw puts to rest many of the lingering myths about the patriarch. As the first biographer to be granted full acess to Kennedy’s papers, Nasaw left no rock unturned. What one gleans from The Patriarch is that Joseph P. Kennedy was a complicated man, full of contradictions. 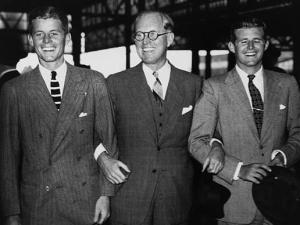 He was an attentive, loving father, anxious to meet the needs of his nine children. Whether it was a school assignment or a common cold, Kennedy was engaged and quick to offer help, but he was hardly present in any of their lives. He was either off conducting business in Hollywood, serving in Washington and later in London, or vacationing in Palm Beach.

Kennedy adored his devoted wife, Rose, though he was unfaithful even when he was courting her. The infidelities would not let up until he had his stroke.

His view of Jews varied. On the one hand, he was ambivalent about saving the Jews from Nazi Germany and always had an anti-Semitic joke at the ready. On the other, some of Kennedy’s closest confidantes were Jewish, including his chief liaison to the media, New York Times columnist Arthur Krock (whom Nasaw discovered had an unusually close relationship with Kennedy, which for a journalist was borderline unethical).

Austere in his personal life, Kennedy rarely drank, exercised regularly, took few financial risks once his wealth was established and attended mass as often as he could given his hectic schedule. But in public life he was unable to restrain himself and could be viewed at times as self-destructive. Kennedy had little regard for social etiquette or political deference. Against the wishes of the FDR administration, he aired his opinions before they could be vetted, views that eventually had an adverse effect on the political futures of his sons.

In the same vein as David McCullough’s Truman or A. Scott Berg’s Lindbergh, Nasaw has produced a book that will appeal to the scholar, the book critic, and more importantly the general reader. The book’s scholarship is unmatched and its prose flows effortlessly. For those infatuated followers of the Kennedy family or interested in twentieth century American history, I could not recommend a more gratifying read – just make sure (due to its weight) it’s the electronic version.

Adam Henig is a biographer, blogger and book reviewer. You can read more of his work at: