“We got the bubble-headed beach-blonde who comes on at five/She can tell you about the plane crash with a gleam in her eye/It’s interesting when people die/Give us dirty laundry.” Don Henley 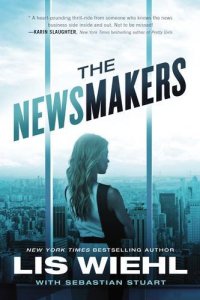 Erica Sparks is a recovering alcoholic who capitalizes on a fluke event to rejuvenate her career. A former televison anchor, she is cast off to nowhere land but manages to be in the right place at the right time. With a convergence of looks, talent and luck, she finds herself back on the media map.

Sparks is separated from her daughter, falls in love with her producer, lands her own TV show, and confronts evil within a matter of weeks. She could easily be the next superhero in a Marvel blockbuster.

The book is co-written by Lis Wiehl with Sebastian Stuart, although the collaboration is not explained. It is the 12th book by Wiehl, seven of which are “April Henry” stories, and three of which are “Pete Nelson” stories. For those who are drawn to Sparks, there will be another Sparks story as is made clear by the final paragraph of The Newsmakers.

The story unravels a bit deliberately and then hurries along to its neat conclusion. It is, for the most part, enjoyable. However, it’s a bit much to accept that within within two weeks our protagonist is on site at a boat crash linked to terrorism, is a witness to the murder of a political figure, is offered a Cable TV position on the Global News Network, and comes within milliseconds of being part of an on-air tragedy. It sounds like the synopsis of a Lifetime made-for-TV film.

So this is not a deep read for serious thinkers. It’s more of a quick read for the beach or a plane ride. And, yes, there is an audience for such delightful if improbable fluff.

The Newsmakers was released on October 4, 2016.

Dave Moyer is a school district superintendent and is the author of Life and Life Only, a novel about baseball, love and Bob Dylan.