I know you remember.   But I will make you forget…

Anglophiles, mystery lovers and rowing fans – this is a book for you!   Author Deborah Crombie has added a fourteenth book to her impressive list of mysteries with the February 2012 release of No Mark Upon Her.   The tale focuses on the intersection of two activities, work at Scotland Yard and rowing on the River Thames.   The first victim is Rebecca Meredith who was a high-ranking member of the force and an Olympic class rower on the comeback trail.   The discovery of her body along the banks of the river jump-starts the search for her killer.

Although Crombie is a native of Texas, she flaunts knowledge of Great Britain that she acquired while living in England and Scotland.   The narrative is filled with British phrases that were not familiar to this reviewer.   A Kindle or Nook e-book version would provide easy access to definitions.   Regardless, the language is not so far-fetched that a reader would lose the meaning of what’s being said.   The locations for the action are nearly cinema graphic which gives the reader the sense of having visited the locale without the burden of jet lag.

The good guy characters are warm and knowable and the bad guys are thoroughly despicable.   Figuring out which group each of the characters falls into is a bit of a challenge.   While married members of the Scotland Yard force, Gemma and Duncan Kincaid, are clearly in the good guys group, their fellow officers are not so strongly portrayed.   Interestingly, Crombie has set up pairs of characters, both couples and work partners which make for an engaging read.   Some folks are just working, others are falling in love and a few are plotting the removal of obstacles in their evil path of greed.

There are crimes galore, rape, murder, arson and theft.   One of these crimes seems to lead to another, almost logically!

A review copy was provided by the publisher.   In Great Britian/Europe, this book has been released with the title No Mark Upon Her: A Kincaid and James Mystery.

A lot of people claim to be able to judge someone’s emotional state by looking in their eyes.   I don’t make eye contact, so that’s a talent I’ve never perfected.   When I talk to people, I generally look at their mouth, so while I can’t judge emotions, I’m pretty good at identifying cavities.

Andy Carpenter is the featured character in last year’s release by David Rosenfelt, One Dog Night.   Rosenfelt spins a most enjoyable yarn, so enjoyable that I read into the night only putting the book down after reading the last page.   This time around, Andy, Laurie, Maurice and the rest of the defense team are challenged by a client who believes he is guilty of a heinous crime, mass murder by fire.

Noah Calloway, the client, has been an upstanding citizen for many years after turning his life around, and away from addiction.   Noah has a deep, gnawing sense of guilt about a fire that killed 26 people; however, he does not remember setting the fire.   His wife, Becky, won’t accept a guilty plea and she takes her case to Andy.   There is, of course, a reason Andy can’t refuse Becky’s request.   Tara, Andy’s beloved dog, was Noah’s dog (nee Hanna) before she was placed for adoption because Noah’s addiction made him unfit to care for the dog.

Once Andy gets to know Noah, he realizes that there is no way this gentle man could have incinerated 26 people in an apartment building.   The task at hand is to find the arsonist and assure Noah’s exoneration.   The plot contains a generous helping of twists and offshoots.   While the main characters are familiar to fans of this series, the rest of the players are an odd assortment of famous and infamous folks who make the story take on a patchwork effect.   Everyone has a piece of the puzzle.

The race to the solution is very engaging.   Rosenfelt’s puns and the smart mouth he has given to Andy make it a page-turning delight.

A review copy was provided by the publisher.   One Dog Night is also currently available as a Kindle Edition or Nook Book download, and as an Audible audiobook.   It will be released in paperback form on May 22, 2012. 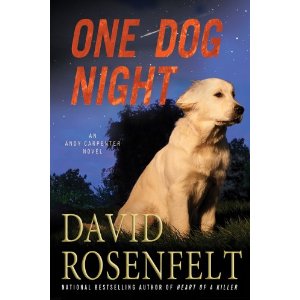