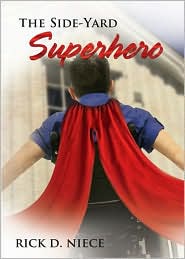 “Used to dream in that small town/ Another born romantic that’s me…”   John Mellencamp, “Small Town”

Rick D. Niece made a promise to a childhood friend, and while the central premise of his book The Side-Yard Superhero revolves around his visit later in life to his ailing former companion in which he fulfills that promise, the book is more about the simplicity and human decency found in the everyday experiences of small-town America.

Niece, president of College of the Ozarks, constructs his tale almost as if he pulled the old John Irving trick and started with the ending of the story and then moved backward to the first sentence.   In between is the story of Niece’s childhood in DeGraff, Ohio.

As a boy, Niece secures a paper route and, in so doing, interacts with virtually everyone in his hometown.   This includes the unforgettable Bernie Jones, who – stricken with cerebral palsy – eagerly awaits Niece’s arrival on his bicycle each day from his wheelchair in the yard along the side of the house.

The reader encounters church socials, trick or treating, and Boy Scout award ceremonies.   Even the carnival comes to town and, you guessed it, Rickie takes Bernie.

Think Mitch Albom, and you have the idea of the type of storytelling you will experience in Side-Yard.   The book occasionally slips into sentimentality, but it is largely free of it, because the book has a more comprehensive story to tell than just the relationship between its two characters.   The verse which is interspersed between chapters is usually effective and works better than anticipated.

Without giving away too much of the story, this reviewer is left to wonder if hope really can keep a person alive; if history will ultimately judge America on how it treats its old, sick, and weak; and what in the world this country would be like if we were ever to lose our small towns.

Some stories need to be told, and some writers have a story they just have to tell.   This is the case with Rick D. Niece’s The Side-Yard Superhero.

This review was written by Dave Moyer, educator and author of the novel Life and Life Only.   He is currently working on his follow-up book, Younger Than That Now.   Mr. Moyer also writes reviews for the New York Journal of Books.   (A review copy was provided by Smith Publicity.)