Guilty of the Crime 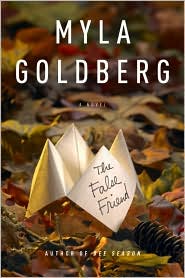 There’s a saying that has been going around for years in the fields of entertainment and sports, “When the legend conflicts with the truth, always choose the legend.”   The distinction between the public story and actual events is what preoccupies Celia, the female protagonist of The False Friend.   Celia, an Illinois State Auditor, lives in Chicago but she’s returned to her small hometown in the formerly forested wilds of New York State to make a confession.   It seems that twenty years earlier Celia and her best friend Djuna and three other girls walked into a dense forest; only four of them walked out.   Djuna was never seen again.

The official story of Djuna’s disappearance is that she was picked up by a man driving a car – a man who stopped on the road by the edge of the forest and convinced her to get into the car.   That man was her killer.   This is the public story that the four girls told to the police and to their parents.   It was never questioned.   But Celia was the girl walking closest to Djuna on that fateful day and she’s now willing to disclose what factually happened…  Or, what she believes in her mind’s eye actually happened.

Celia has a somewhat naive faith in the premise that once she tells her version of the truth everything will be made better.   She also thinks that her former classmates will readily accept her version of the truth.   She’s seeking absolution and is excited that it’s about to be granted to her belatedly.   But the funny thing is that once she meets with the other girls (those willing to communicate with her), they don’t buy into her story.   Each one is absolutely certain that she saw Djuna being lured into the stranger’s automobile.

Author Myla Goldberg does a fascinating job of translating what is essentially a small story into a larger one about our roles and responsibilities in society.   If all of those around us wish to accept one version of events, of facts, what right do we have to say they’re wrong?   Sometimes there’s far more comfort to be had in the public story, the legend, than in simpler frail human events.

When reading this novel, each reader will come to think of certain events in his/her own childhood.   We may be sure that things happened a certain way on a certain date, only to find that our family members are wedded to an entirely different version.   Telling those around you that they’re wrong only makes them feel uncomfortable, if not angry.   (Thus, we all have sometimes accepted the group’s story instead of our own.)

Goldberg has created a fascinating and extremely engaging novel in Friend.   Her calm, deliberate style will call to mind Catherine Flynn (The News Where You Are) or Anne Tyler (Noah’s Compass).   The uncertainty over an event that happened decades earlier is also a bit similar in storyline to Lisa Unger’s recent novel Fragile.

Goldberg’s talented prose will cause the reader to read and re-read several lines such as these:

“The school building itself was utterly unchanged…  The opposite edge of the walk displayed a gray boulder the size of a crouching child.   On it were carved the words JENSENVILLE HIGH, Gift of 1993…  The rock reminded Celia of a marker designating the future resting place of herself and her former classmates, all of them to be interred beneath in eternal, obligatory return.”   (Whew)

At the conclusion of The False Friend, Celia must make a critical choice – Will she continue to dispute the perceived history of a local tragedy or will she come to side with the community’s accepted version of events?   You will need to read this intelligently told tale to find out what decision she makes.   You will then wonder if you would have made the same choice.

This review was written by Joseph Arellano.   A review copy was provided by the publisher.   The False Friend will be released by Doubleday on Tuesday, October 5, 2010.

On Book Reviewing – Plausibility is the Thing

One of the key items that a book reviewer of a novel needs to consider is plausibility.   Does the basis of the tale told in the book ring true?   Are the characters like people one would encounter in real life, or are they either too perfect, too flawed or strange?   Sad to say but if the story’s premise and/or its characters are not plausible then reading the novel becomes an exercise in futility.   Oh, the story may have some positive features but lacking plausibility, it’s like saying that someone’s done a good job of putting lipstick on a pig.   Great makeup job but it’s still a pig.

What does the reviewer do when in this situation?   Focus on the writing itself while reminding the potential reader that this may be a talented writer but he/she has not met his/her potential this time around.   In other words, offer hope for the future.

Now here’s the funny thing…   If a reviewer questions the plausibility of a novel the author is never going to concur with this finding.   Never, ever, ever.   His or her response will be something like, “I based this on something that actually happened and I know (or knew) people like the characters in this book!”   Fine but that’s the author’s perspective not the reviewer’s view.   What it translates into is a case where a plausible story – supposedly based on real-life – was botched in the writing.

A U.S. Supreme Court justice once said about pornography, “I cannot define it but I know it when I see it.”   The same is and should be true for a reviewer – either he or she “sees” the plausibility in a fictional setting or he/she doesn’t.   Either way, it is critical for the reviewer’s credibility to call it as he sees it.   Play it as it lays.

There’s another famous quote, one attributed to an actor, “Once you’ve learned to fake sincerity, you can fake anything.”   But a writer of a fictional work can’t fake plausibility – its either on the written page (“on all fours,” as law professors say) or it’s absent.   And if a reviewer makes the call that it’s absent the writer should remember that it’s nothing personal – your next book may become one of the reviewer’s favorites.

This article is one in a continuing series.   Pictured: The False Friend: A Novel by Mya Goldberg (author of Bee Season) which will be released by Doubleday on October 5, 2010.   This is one of those books that we look forward to reading and reviewing.