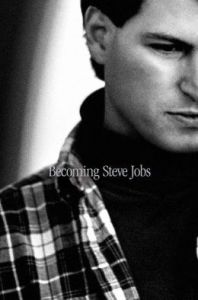 Becoming Steve Jobs: The Evolution of a Reckless Upstart into a Visionary Leader by Brent Schlender and Rick Tetzeli (Crown Business, $30.00, 464 pages)

“You cannot connect the dots looking forward; you can only connect them looking backward.” Steve Jobs

Schlender and Tetzeli Connect the Dots

“This is the West, sir. When the legend becomes fact, print the legend.” These words from Maxwell Scott seemed to have come to life in Walter Isaacson’s earlier-released biography of Steve Jobs. Isaacson’s version of Jobs’ story relied on commonly stated “facts” about Jobs, which have become the stuff of legend. And these facts strongly emphasized the less desirable aspects of Jobs’ personality and aggressive leadership style.

This new bio by Brent Schendler and Rick Tetzeli presents a kinder, gentler account of the man who co-founded and led Apple Computer; it seeks to get past “The cliche that Steve Jobs was half genius, half a–hole.” And it largely succeeds by emphasizing that any shortcomings on Jobs’ part were due to his dedication to Apple Computer: “He put the needs of the company ahead of any (personal or) work relationship.” That dedication produced the most successful technology company in the world. (It may also have led Jobs to delay cancer surgery that might have spared his life. When he later had the surgery, he was given only a “50-50” chance of living for five years; he survived for seven post-surgery years.)

This excellent account allows one to get to know Jobs as a living, breathing human being – an imperfect, fully goal-oriented man full of “deep restlessness.” Becoming Steve Jobs is such an effective telling of Jobs’ life story that at the conclusion of the book the reader will grieve his death – the world’s loss, all over again.

A review copy was provided by the publisher. Becoming Steve Jobs was released on March 24, 2015.

“In this deeply researched book, you’ll find the most truthful portrait of the real Steve Jobs.” Marc Andreessen

Life in the Fast Lane

First-time author Charles Dubow has captured the sophisticated conversation style often heard in wealthy and privileged social circles such as the one in East Hampton, New York during the summer season. Dubow is careful in avoiding parody, smoothing the exchanges to eliminate the stilted manner so often used in books featuring this sort of crowd — think The Great Gatsby.

Although the setting is East Hampton and the time is present day; the story could easily be set in the 1940s. This reviewer experienced feelings reminiscent of the those felt while watching my all-time favorite movie, Laura; however, Indiscretion is not a mystery. Moreover, as the story unfolds it takes a back seat to the interactions of the characters and the locale. Perhaps it is a morality play.

Not everyone will pick up on the specificity that Dubow uses to pinpoint the sort of people his characters are. The main characters are fraternity brothers having joined Delta Kappa Epsilon, Deke for short. This reviewer sought out a picture of the author and it came as no surprise that he bears a strong resemblance to the Dekes I knew at Cal. He may even wear penny loafters without sox as was the Deke-preferred style back in the late 1960s.

The main narrator of this book, Walter Gervais, is an independently-wealthy attorney who owns a summer cottage next door to a National Book Award winner and his wife. The author, Harry Winslow, and his wife, Madeline, are the perfect couple married for many years. They have one son, Johnny, who completes their family. Walter, Harry and Madeline are in their 40s. Walter has always loved Maddy (short for Madeline) and he contents himself with being an honorary member of their family.

As the title suggest, there is an indiscretion that pulls apart the perfect couple. A mysterious, self-possessed and beautiful young 26-year-old woman named Claire insinuates herself into their world. Claire is the current interest of a shallow and overbearing man. As fate would have it, Claire joins Clive for a weekend in the Hamptons where they are guests at a dinner hosted by Harry and Maddy. Claire soaks in the cozy and charming atmosphere in their home. It is a stark contrast to Clive’s hard-edged modern house.

The narrator shifts among Walter, Maddy and Claire are well executed and add depth to the telling. As each addresses the reader, the tale takes on complexity. Dubow is an excellent writer and, hopefully, this first novel will be followed by others.

A review copy was provided by the publisher. “Indiscretion… marks the debut of a remarkably gifted writer and story teller whose unique voice bears all the hallmarks of an exciting, new literary talent.” Amazon

Heart of a Killer

Author David Rosenfelt has added another winner to his long lists of credits with his latest effort, Heart of a Killer.   This reviewer has written about two of his Andy Carpenter mystery novels.   This time out, there is a different and unlikely hero.

The main character, Jamie Wagner, is a Harvard Law School graduate working as an associate at a corporate firm whose office is located in New Jersey.   Wagner, something of a contrarian, chooses to live in Manhattan on the west side where the atmosphere is urban and enjoyable.  Pro bono cases are often assigned to attorneys who are working their way toward a partnership in the firm.   This is precisely the position Wagner is in when the story opens; however, he sees little hope for attaining partner status.

The pro bono case Wagner is working centers around a woman who pled guilty to the murder of her nasty, evil husband six years prior to the time of the story.   Sheryl has been sitting in a New Jersey prison quietly doing time as a model prisoner while her mother takes care of granddaughter Karen.   Karen has a failing heart and her health has taken a turn for the worse.   She needs a transplant or she will die.   Yes, Sheryl has herself tested and is found to be an ideal match.   The confusion around whether Sheryl has the right to donate her heart provides ample motivation for Wagner to bring his Harvard education and well-honed brief writing skills into the picture.

The mystery revolves around some very seedy and brilliant characters that lack a conscience, hence, the proliferation of deaths by nefarious means.   Rosenfelt is a master of understatement and dry wit.   He aptly displays both in Heart of a Killer.   Rather than a straightforward mystery, this one is an in-depth examination of human nature and personal values.

After three wonderful reads, this reviewer is considering delving into past works by Rosenfelt.   It’s like betting on a sure thing.

A review copy was provided by the publisher.   Heart of a Killer was released on February 14, 2012.   Click on this link to read the opening pages:   http://www.davidrosenfelt.com/heart-of-a-killer-first-chapter/