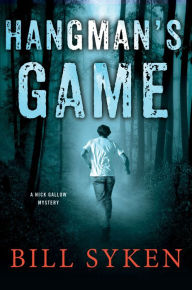 Former Sports Illustrated reporter and editor, Bill Syken, has presumably experienced his share of NFL locker rooms. In Hangman’s Game, his fiction debut, Syken takes us from Philadelphia to the Deep South and back through the lens of Nick Gallow, a punter (of all things). Considering that the murder mystery is subtitled A Nick Gallow Mystery, one can reasonably presume there are more coming. And, if I am correct and Nick enjoys the career of a typical NFL punter, Syken will have the opportunity to take us to all corners of America before Nick is done solving crimes!

The novel opens with Nick out to dinner with the team’s first round draft choice, Samuel Sault, and their shared agent, Cecil Wilson. It ends… Well, no spoiler here. But, on the way out of the restaurant, Samuel is murdered, Cecil shot, and teammate Jai Carson, who is at the scene partying with his entourage, falsely accused. Enter Nick.

It is a reasonable assumption that J.C., as Jai is called, was trying to eliminate the competition, but Nick, who comes across as being almost entirely concerned only about himself, is convinced Jai is innocent, plays the team loyalty card, and attempts to uncover the truth. Nick is swimming against the tide, mostly because Jai is a completely unlikeable jerk, who is even more self-absorbed than Nick, who isn’t really that likeable either.

Syken’s writing is solid. The reader is effectively led through the story. Interest in discovering who did what is maintained throughout. The contemporary theme of chronic traumatic encephalopathy (the concussion thing) comes into play, though it is not truly developed to any great degree. Despite Nick’s faults, the reader is drawn to him. The only knock is that the story plays on some of the classic stereotypes of the narcissistic, womanizing, gun-toting athlete. However, with the preponderance of these issues in the NFL, perhaps it is truly closer to the norm than an aberration.

Syken has authored a good first novel. It will be interesting to see if he can, next time around, build on his craft and go into greater depth with some of the issues that appear to be floating around in his mind.

A review copy was provided by the publisher. This book will be released on August 18, 2015.

Dave Moyer is an education administrator and is the author of the sports-oriented Life and Life Only: A Novel.

An early look at Hangman’s Game: A Nick Gallow Mystery by Bill Sykes, which will be released by Minotaur Books on August 18, 2015.