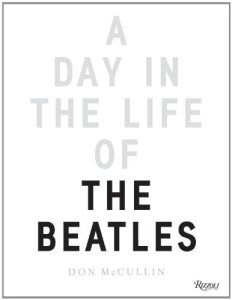 This is a charming set of Beatles photographs taken in a single day about 6 months before what was to be their dissolution.   What we seem to see is a band of brothers, happy to be together.   Something else is that they are not the Beatles who were photographed to look as much like each other as possible.   Instead, what we see are four separate individuals – a prideful and content Paul, a wacky John, a contemplative George and a Ringo who looks like he’s tougher than the rest.   (Paul’s dog Martha makes a guest appearance.)

It’s a bittersweet collection as it represents the last time the band members would not look either exhausted or angry.   These were the boys enjoying the calm before the storm.   They also seemed to occasionally be making fun of their earlier stage-managed image; some of the poses reflect an overly playful – if not over-the-top – Monkees aura.

At $24.95, it’s a Rizzoli that will be a bit rich for some budgets, and it’s not essential when compared to the large, comprehensive Chronology book.   But the picture of Paul, on pages 122-123, appearing to sleep with a smile on his face while his best mates laugh is worth the money.

A review copy was received from the publisher.   Note:  One article about this book noted that at one point the Beatles tried to buy the rights to this collection of photographs.   This raises two possibilities: either the band members loved the photos so much that they wanted to release them as an Apple book, or they disliked them so much that they wanted to ensure they would never be released to the world.   A fun aspect of reviewing the pics is trying to decide which possibility was the more likely one.