Tag Archives: Break On Through

Take It As It Comes

The Doors: A Lifetime of Listening to Five Mean Years by Greil Marcus (PublicAffairs, $21.99, 210 pages)

“There were thick-headed, battering horns all over the album…  they didn’t make the music better…”   Greil Marcus on The Soft Parade by The Doors

This collection of short essays by Greil Marcus might have been subtitled, The Random Things I Think About While Listening to The Doors.   It is not a band biography, nor a definitive account of their music, so it won’t be of much use to those just discovering the songs and albums of this group; nor will it interest Doors fanatics, as there’s virtually nothing new included here.

With Marcus, it seems to always be hit and miss…  He earlier produced a great collection of essays about Van Morrison which seemed to capture the essential nature of the musician, but when he attempted to do the same with Bob Dylan, it was pretty much a complete failure.   The Van Morrison book was a grand slam – the one on Dylan was a quick strike-out.

Before going further, I need to put my cards on the table about The Doors.   I felt they were one of the most over-rated bands of their time, and the critics have remained strangely kind to them through the years.   (A late-November 2011 article in The Wall Street Journal wondered aloud why the group’s music is still popular.)   Except for some clever placements on movie soundtracks, I don’t see – or rather, don’t hear – their music as having aged well.   That is, it does not adapt well to current times perhaps because when it was originally recorded it seemed to provide a sense – or rather, a preview – of music’s future.   But the promise of The Doors’ first two albums (neither of which hit number 1 on the U.S. music charts) never materialized in what was to follow.   They produced two essentially tedious albums – Waiting for the Sun and The Soft Parade – that included singles so bad (Hello, I Love You; Touch Me) that Jim Morrison usually refused to sing them on stage.   It’s true that they had a sense of redemption before the end, with the decent Morrison Hotel and close-to-excellent L. A. Woman albums, but they nevertheless ended up as a slight version of the music revolutionaries they once threatened to be.

One of the issues with Greil’s approach is that he – being a Berkeley resident – lumps them in with the San Francisco bands of the time in terms of their somewhat psychedelic approach to their music and their lives.   Yes, Marcus is fully aware that they were a Los Angeles band (Morrison being a UCLA graduate) but he never seems able to capture the relationship between their place and their music.   He does try, in an essay about the L. A. Woman album, one which is interesting reading but empty on the actual mental nutritional calories it offers.

In discussing the band and southern California, Marcus also falls into the trap of seeing some kind of connection between their songs (Break On Through, The End, Riders On The Storm) and the violence of the Manson Family.   Which is nonsense, as Charles Manson made clear that he was irrationally influenced by the music of The Beatles on the White Album (specifically Helter Skelter) but never by The Doors.   It’s an interesting straw man argument that Marcus sets up, but it is essentially such a weak one that there’s no need to do more than set it aside.

Well, then, should one read Greil Marcus because he does such a valiant job of retaining the spirit of Gonzo rock journalism?   In other words, should you read him because he writes now as if he were writing for Rolling Stone, Creem, New West, Ramparts and other publications of the dear-departed 60s and 70s?   You might elect to, but I would suggest a couple of alternatives if this is your thing (or your bag, as it would have been called back in the day).

One fine choice is Out of the Vinyl Deeps: Ellen Willis on Rock Music, edited by Nona Willis Aronowitz.   Willis began writing rock criticism for The New Yorker in 1968 and almost created the genre of rock criticism tied to cultural and political events.   And then there was the master, the late Lester Bangs of San Diego, California.   There are two compilations of Bang’s work – Main Lines, Blood Feasts and Bad Taste: A Lester Bangs Reader and Psychotic Reactions and Carburetor Dung: Rock’N’Roll as Literature and Literature as Rock’N’Roll.   There’s also an essential biography from 2000, Let it Blurt: The Life and Times of Lester Bangs, America’s Greatest Rock Critic by Jim Derogatis.

Trust me, reading or re-reading Lester Bangs and Ellen Willis will take you to some places that you won’t find in The Doors: A Lifetime of Listening to Five Mean Years.   And I wonder if that subtitle was actually meant to refer to Five Lean Years.

A review copy was provided by the publisher.   Note:  If you’re still wondering about whether you should read Marcus’ account of The Doors, keep in mind that he loves their live recordings (sigh) and the dreadful (“excoriated”) 1991 film The Doors by Oliver Stone – something which is truly hard to believe.

“Most things you have to do in life are at least a little bit questionable.”   Emily St. John Mandel

“To live outside the law you must be honest.”   Bob Dylan

The Singer’s Gun is a recklessly entertaining book from the unique novelist Emily St. John Mandel (Last Night in Montreal).   Mandel’s writing style is so unique that it’s sui generis – not classifiable.   If Mandel had been a musician, she might have been Harry Nilsson or, perhaps, Joni Mitchell.   Like those two, Mandel has the guts of a cat burglar; she’s unbridled, not hemmed in by other’s boundaries or rules.   Reading Mandel is quite a fun ride especially because, as one book store owner stated, “She doesn’t shy away from the grey areas of life.”

The Singer’s Gun is the story of Anton, a man born into a New York City-based family that lives in the grey and questionable areas of life.   Anton’s parents sell stolen architectural goods (Walker Architectural Salvage) and his female cousin Aria sells fake passports, green cards and other things of which Anton desires not to know the details.   Anton, of course, has a bit of the thief’s blood in him so he uses false pretenses to secure a copy of a diploma from his supposed alma mater, Harvard.   The only problem is that Anton graduated high school, not college.

After Anton’s long-term engagement to his fiancée results in a very, very short-term marriage (it’s shorter than the honeymoon trip), and he has trouble as work, he’s tempted to take a “last job” offer from Aria.   But then the plot, the story line, of The Singer’s Gun is not of great import – it’s a pretense to let Mandel perform her magic… 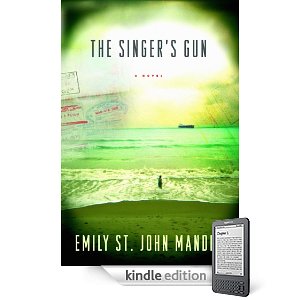 Here is an example, a paragraph, from this break through novel:

Anton met a cellist at a party that year, a spectacularly talented girl who didn’t know he’d never been to Harvard, and he proposed to her eight months later.   Sophie and the job together formed the foundation of  his new life; between the straight clean lines of a Manhattan tower he rose up through the ranks (and to the 11th floor), from junior researcher to VP of a research division.   His dedication to the company was mentioned in his performance reviews.   He directed his team and came home every night to a woman he loved in an apartment filled with music in his favorite neighborhood, until it all came apart at once and he found himself (on the 4th floor) lying naked next to his former secretary in the summer heat.

Yes, the whole book is like this which means you, the reader, won’t dare to presume what will happen next.   Let’s just say that in the end Anton is forced to make a decision between his old life and his old family, and a new life and a new family.   His choice will also involve a decision to either live outside of the law or within its confines.

At the conclusion of The Singer’s Gun, the reader finds that Anton has determined exactly who he is, and how he must live.   It’s, yes, a revelation at the conclusion of another modern morality tale.   Still, in Singer’s Gun the story isn’t half as important as the telling, and in the hands of Mandel the rocking and rolling never stops!   Whew!

A review copy was provided by the publisher.   The Singer’s Gun will be released in trade paper form on April 19, 2011.