How Can I Tell You 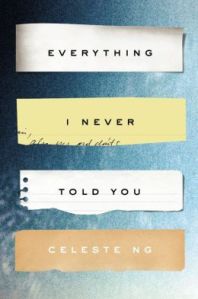 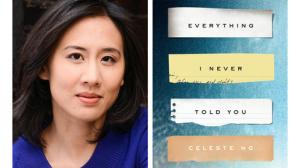 “James is all too familiar with this kind of forgetting. From Lloyd Academy to Harvard to Middlewood, he has felt it every day – that short-lived lull, then the sharp edge to the ribs that reminded you that you didn’t belong.”

Celeste Ng’s novel is about a Chinese-American family in the truest sense of the words; James Lee is a Chinese-American professor married to an Anglo woman. Although born in the U.S., “(James) had never felt he belonged here….” James has consistently experienced discrimination as a minority resident of Ohio – an experience his wife Marilyn has largely been exempted from, and his sense of bitterness has been building up. Matters come to a head when his fifteen-year-old daughter Lydia goes missing, and is eventually found dead.

The loss of Lydia threatens to destroy the Lees’ marriage as Lydia was the favorite of their three children, a daughter in whom their hopes for a perfect future had been placed. This family novel is also a mystery as the circumstances of Lydia’s death are largely unknown. Marilyn Lee makes it her mission to “figure out what happened… She will find out who is responsible. She will find out what went wrong.”

Ng’s thought-provoking tale informs us that a sudden tragedy can either destroy individuals or give them the chance to start anew. And this unique, engaging novel reminds us that “the great American melting pot” operates haphazardly and imperfectly.

This review is a duet of sorts.   Both books were read in the audio format.   They explore what can happen when a young girl loses a parent or multiple parents.   Ironically, each begins on a separate coast of the U.S.; however, all the main characters end up in California, albeit Los Angeles and the San Francisco Bay Area, respectively.   As we’re often told in self-help books and philosophical literature, it’s not the incident that shapes us, but rather, the way we react to it.   Each of these tales packs a wallop of an incident.

In The Next Best Thing, we learn that young Ruthie Saunders endured the horror of an automobile crash that killed both her parents and maimed her for life.   Ruthie’s face is mangled on one side, as is her body.   She has the good fortune to be the granddaughter of a truly kind and loving woman who steps in and gives her a life filled with hope and understanding.

Although Ruthie braved numerous painful surgeries over the years and the unsympathetic stares of her classmates, she persevered.   Her scars and physical limitations are vivid and readily noticeable but her spirit is strong.   Together with her beloved grandma, Trudy, Ruthie travels from the East Coast to take on the daunting challenge of breaking into the Hollywood television writing scene.   She becomes a promising comedy writer in Hollywood and even has a boyfriend.   The story takes on a sense of urgency when Ruthie’s autobiographical sitcom script is given the green light and is produced as a television show.

For sixteen-year-old Sarabeth life had always been difficult.   Her mom had overwhelming difficulties with depression that overshadowed the family.   Luckily for Sarabeth, her best friend Liz – who lived across the street in upscale Palo Alto, California – had a loving and good-natured family that helped to balance her life.   This difficult yet somewhat stable life was destroyed when Sarabeth’s mom committed suicide.   In this case, Liz’ family took her in and provided a home when Sarabeth’s father fled to the East Coast.

Despite years of loving friendship from Liz, Sarabeth nearly wallows in self-pity and neediness despite her outward good looks.   Her choices in men run to ones who are married with children.   Her career is limited to small artsy projects and a meek existence in a somewhat-dilapidated cottage behind another house in Berkeley.   The real challenge comes when Liz’ daughter acts on her own suicidal impulses.   Liz is unable to grasp how her robotic take on life has failed her daughter.   The supportive friendship between Sarabeth and Liz falls apart.

Given the remarkable parallels, these two tales could not be more dissimilar.   Both of these authors are well-known and very successful; however, Jennifer Weiner demonstrates her ability to craft engaging, sympathetic, and dare I say,  spunky characters.   This reviewer’s attention was fully focused on Ruthie and her life while Sarabeth provoked a slight revulsion due to her clueless self-pity and lack of empathy.   Ann Packer chose to portray a pair of lifeless and clueless women whose plights evoked barely a stirring of compassion.   In fact, a song title for a review of this book could easily have been, Get Over It.

As always, the narrators contributed significantly by literally setting the tone for the listener.   Olivia Thirlby gave Ruthie in The Next Best Thing a youthful, optimistic and somewhat naive voice.   She drew this listener in and brought out feelings of caring and hope for Ruthie and Grandma Trudy.

Conversely, Cassandra Campbell’s pervasive monotone was heavy and lacked the necessary inflections that produce engagement in the listener.   To her credit, Campbell had a difficult assignment as she portrayed Sarabeth, Liz and her daughter.

The Next Best Thing is Highly Recommended, while Songs Without Words has a limited audience – folks who don’t mind devoting the time and money this difficult story requires.

These audiobooks were purchased by the reviewer’s husband.

This second novel from former zookeeper Ann Littlewood, pits human nature against the honesty of zoo animals for a compelling read.   A fictitious zoo in the Pacific Northwest provides the location for a unique spin on an age-old tale of a heroine in peril.   The main character is Iris Oakley who is not only a recently widowed zoo employee, but also pregnant with her deceased husband’s baby.

In this story there are actually two heroines in peril, Iris Oakley and an aged elephant named Damrey.   Damrey has been a favorite of local families who visit her at the zoo.   Author Littlewood makes a case for the depth of knowledge required of zoo personnel.   It’s not just sweeping up after the animals and making sure they have their favorite foods.   Behavior, instincts and training are well documented for a wide range of the zoo’s inhabitants.   There are births and deaths that tear at the hearts of the staff.

Littlewood opens the mystery with the death of the zoo superintendent, a fellow who was good at his job but not well liked.   He’s discovered in Damrey’s enclosure being menaced by the very agitated elephant.   Iris is the first on the scene and it falls to her to assist in determining who is responsible for the super’s death.

Along the way we get to know the elephants.   They have not been part of her job until the discovery of the body in their enclosure.   Her regular charges are the big cats; however, pregnant women must not empty cat pans, big or small.   Iris is a remarkable character who captured this reviewer’s sympathies.

Well recommended. Let’s hope Ms. Littlewood keeps writing about what she knows so well as she provides entertainment bundled with fascinating learning.