Wild Cats of the World is a coffee table sized book that at first glance looks like it would be the perfect gift for any feline lover. The book examines 38 species of small and big cats, augmented with beautiful photos and sketches. It also imparts interesting information, like the fact that female cats are actually more efficient hunters than males – since they don’t stalk things they can’t kill, and that wildcats can live a full 19 years in captivity. It’s also repeatedly stated that wildcats can and do interbreed with domestic cats. 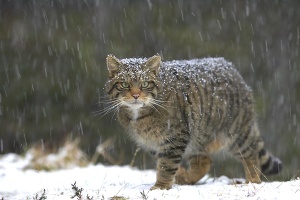 Unfortunately, this book has several weaknesses. Hunter is far too concerned with what each type of cat kills and eats; there are too many photos of cats with their prey – which deems it unsuitable to be kept around children; and the book over-emphasizes the issue of extinction of species. What could have been a joyful celebration of the world’s most successful mammal – one that exists in both large and small forms – becomes a depressing, dragged-out, textbook-like read.

There’s not enough attention paid to the 43 breeds of domestic cats, which are far from extinct with 500 million of them serving as beloved pets, and an additional 500 million living as feral creatures. (500 million feral versions of Felis catus/Felis silvestris definitely equals a very successful type of wild cat!) And the high-priced book is poorly edited (“[a] survey must… continue for a long enough to sample…”).

Overall, a miss instead of a hit.

A review copy was provided by the publisher. This book was released on October 13, 2015.