I recently had the pleasure of tasting Karl Strauss Brewing Company’s highly acclaimed Red Trolley Ale. This Irish Red boasts gold medals from the 2010 and 2013 Great American Beer Festival as well as the 2010 and 2012 World Beer Cup, and 14 medals from various other beer festivals and competitions. The brew’s website claims Red Trolley Ale is a “medium-bodied beer with heavyweight malts” and their description does not mislead.

This beer poured a beautiful deep copper/toffee color with a barely present tan head. The head barely lasted a minute as it dissipated into nothing. There was also an absence of lacing. Maybe I gave it a subpar pour, but I doubt that was the case. The color was very pleasing, but the lack of a head and lacing severely reduces its appearance rating down to a 2.5/5.

When smelling Red Trolley Ale, you get nothing but malts on the nose. It doesn’t boast an overpowering aroma, yet there is an obvious caramel backbone with hints of toffee. It’s pretty simple on the nose, but that does not diminish the quality. It’s smell is a solid 3.5/5.

As promised, this beer definitely prides itself on the “heavyweight malts.” It is much more complex on the palate than the nose, however. Red Trolley is predominantly caramel and toffee flavored beer, though there seem to be no bittering hops, but that’s to be expected for the style. Instead, there is a hint of some dark fruits on the back end and after taste, perhaps a bit of San Diego influence into the Irish Red style. As the beer warms you really begin to appreciate the density and the complexity of the play between the subtle fruit notes against the strong malt base. There also seemed to be some hidden spice characteristics that began to remind me of Great Lakes Brewing Company’s Christmas Ale. This brew definitely takes the palate for a ride – 4.5/5.

The mouth feel was no surprise for an Irish Red. There was low to moderate carbonation and the beer coats the back of the mouth and the throat in a velvet blanket upon first sip. It was a little much for me, but not terrible and definitely on point for the style, so I’m giving its mouth feel a 4/5. 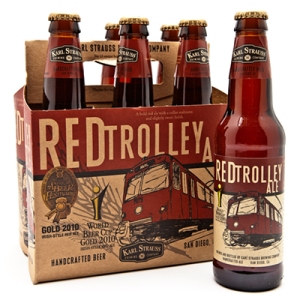 Throughout my tasting I was pleasantly surprised. I’m usually not a fan of malt driven beers and I’m not entirely familiar with Irish Reds, but compared to the ones I’ve had, this is definitely near – it not at – the top of my list. The only thing that really hurts the beer is its appearance, which – though aesthetically pleasing, isn’t entirely important in the tasting. In my opinion, this malt driven brew with its hidden spices and subtle dark fruits would make an excellent winter warmer; great for a snowy evening next to the fire.

Though the Irish Red isn’t my go to style, I highly appreciate this beer and understand the respect it has garnered in the brewing community. When averaging out the numbers, this beer comes out to a very respectable 3.63/5.

Ryan Moyer is a graduate of Indiana University. Red Trolley Ale is brewed and bottled in San Diego, California; thus making it an imported beer for most of the country.