I’m generally not a huge fan of mysteries but this was one that I could not manage to put down.   Devil’s Trill centers around Daniel Jacobus (who likes to be called Jacobus, never Daniel), who was once a gifted musical child prodigy.   As a thirteen-year-old, Jacobus took second place – the same as coming in last – at the prestigious Grimsely Competition at Carnegie Hall.   He’s always had a grudge about what happened to him at the Grimsely – a unique competition held at 13-year intervals – and he subsequently lost his eyesight due to an infection.   Despite this, Jacobus managed to have a fair to middling career as a classical musician, who could literally play blind, without the need for scores.   In the last few decades, he’s made a living as a musical instructor for young musicians – some of whom, in a sense, he grooms to win the prizes and successful careers that escaped his own grasp.

As we meet Jacobus, he elects to be present – along with his latest student, Yumi Shinagawa of Japan – at the latest edition of the Grimsely, where the winning competitor is granted the honor of performing with a priceless Stradivarius violin.   All is fine except that once the special evening is concluded, its determined that the $8,000,000 Stradivarius has disappeared from the reception held at Carnegie Hall.   There are many suspects, but Jacobus soon comes to realize that the New York City police suspect him most of all.   (Jacobus has often publicly expressed his opinion that the Grimsely uses child prodigies unfairly, and he comes to find that all of its winners ultimately fell short of the brilliant careers they were once promised.)

Since the rare violin was under the protection of two armed guards before it was stolen, it’s clear that whoever took it was a person with a deep knowledge of the classical music business.   Forced to clear his name, Jacobus will join with the intelligent and precocious Yumi and a music-worshipping insurance agent to attempt to solve the crime before the police do.   The effort may require Jacobus to leave the country, cementing the perception that he’s a guilty man.

“Unaccustomed to the idea of happiness…  Jacobus was at a loss how to proceed.”

“Jacobus did not suffer zealots gladly…”

What makes this read especially enjoyable is the character of our protagonist, Jacobus.   He’s brilliant but a self-proclaimed grouchy old man:  “…now we’re all just old farts.”   He may remind some readers of the main character-physician in the current TV series, House.   Jacobus lives by his instincts, but he attempts to rule sighted people by intimidation (only his extremely high I.Q. lets him get away with it the majority of the time.) 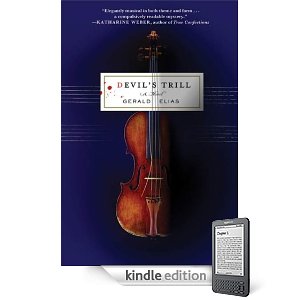 Having a basic knowledge of classical music will assist the reader but is not required.   Elias, who is a violinist, concertmaster and professor of music, supplies all of the necessary background on the composers mentioned in the story, such as Jacobus’ idol Ludwig von Beethoven, Mozart, Bach, Mendelssohn, and the other great Masters.   Reading Devil’s Trill is like sitting in the audience as a great orchestra plays Beethoven’s classic Fifth Symphony.   Highly recommended.

This reader looks forward to picking up the next novel in the Daniel Jacobus series, Danse Macabre.

When I Paint My Masterpiece 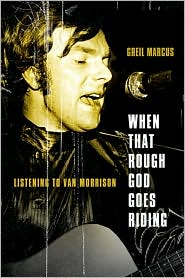 “Music can take us beyond literate sequence and consequence.”   Wilfred Mellers

“If you didn’t hear from him, that just means he didn’t call.”   Van Morrison

Sometimes a complete portrait of a person, or an artist, requires that one explain and explore both their positives and their negatives.   Although rock-critic-writer Greil Marcus is clearly infatuated with Van Morrison and his music, he decided to write this profile – in a sense, a collection of essays about the subject – in an honest fashion.   On the one hand, we see Morrison as a musical genius who can sing songs without a musical arrangement, leading and requiring his backing musicians to follow him.   He’s been a musician who can recruit a record producer by simply singing a new song to him one-on-one, like an actor seducing a director by reading from a promising script.

Then there’s the difficult Morrison, the singer who often avoids looking at his audience; a performer who can storm off of the stage when he’s angry; a singer who sometimes hates being bothered by the joyful participation of those in his audience.   As noted in this account, one night Van was performing for a San Francisco audience when he got tired of their clapping and yelling.   He yelled out, “Just shut up.   Just shut up!   We do the work here on stage, not you.”

And so we see that Van Morrison is a musician-artist of both sequence and consequence.   As Marcus writes, “What defines great singing in the rock and soul era is some underlying tension in the space between singer and song.”

Van Morrison did not start out great.   With the band known as Them he released the notable single “Gloria” (first released as a 45 in a rather weak 2 minute and 35 second cover version by Shadows of Knight of Seattle) and also “Here Comes the Night,” and the much lesser known “Mystic Eyes.”   But the band members did not click as a group, and the newly-freed artist went on to write and record what is today his most played song, “Brown Eyed Girl.”   Yet, there was something about his rock and soul voice that was not totally distinct; he tended to be confused in people’s minds with Eric Burdon of The Animals (it didn’t help that both Morrison and Burdon covered Sam Cooke’s classic “Bring It On Home to Me.”)

Morrison’s solo career went on to be a steadily successful one, but Marcus elects to place the focus here on Van’s masterpiece, Astral Weeks.   Greil, who owns thousands of recordings, confesses to us that, “I’ve played Astral Weeks more than I’ve played any other record I own.”   The tale of how the album came to be created is worth the price of admission, for this was not a tightly structured creation.   Instead, it was the product of near-magical jazz-like improvisation.   The record’s producer, Lewis Merenstein of Chicago (who didn’t know who Morrison was before the recording began) was to say:  “I don’t want to sound existential, but there was Van and that was it; there was no band, there were no arrangements.   The direction was him singing and playing – that was where I followed.   That’s why it came out the way it did…  There obviously was a direction from somewhere in the sky.”

Marcus makes clear in Rough God that Morrison himself does not know the intended meanings of many of the songs he writes, one such song being “Madame George.”   That’s alright, such is the nature of genius.   Vincent Van Gogh would likely not be able to produce a scholarly treatise on each of his paintings.   But Morrison – like his female counterpart Joni Mitchell, is one of those artists who has demonstrated for us lesser mortals that, “There’s more to life than you thought.   Life can be lived more deeply.”

Thank you, both Van and Greil.   Highly recommended.

A review copy was provided by the publisher.   Greil Marcus is also the author of Like a Rolling Stone: Bob Dylan at the Crossroads (Public Affairs, 304 pages, 2006).

The Cambridge Companion to The Beatles, edited by Kenneth Womack (Cambridge University Press)

“(George) Martin was more impressed with the Beatles charisma than their early material.”

The Cambridge Companion to The Beatles is an excellent collection of essays concerning the band’s work.   This compendium manages to cover their musical career from simple rockers to complicated composers without missing a beat.   The chapter, “The Beatles as recording artists” quotes freely from recording engineer Geoff Emerick.   Although it’s a fine summary in a couple of dozen pages, it does not take the place of Emerick’s essential work, Here, There and Everywhere: My Life Recording the Beatles.

As with every account of the Beatles, things start out fine and fun before ending in the train wreck of the band’s dissolution.   We begin with Meet the Beatles and end up with the mishmash digital meddling – and mess – of Love.   It remains, all in all, a sad story.   (Hey Jude, anyone?)

One of the writers notes that major educational institutions – like Cambridge – now see the Beatles as a bona fide topic of scholarly inquiry.   Fine, but collections like this one completely omit the spirit of the Fab Four; their human energy if you will.   This reviewer thinks that mythologizing the Beatles is more destructive than constructive.   After all, as John Lennon said, they were just four guys in a band.   That was enough. 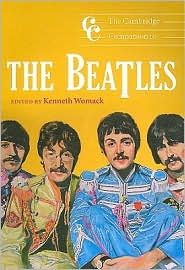