Restless Souls: The Sharon Tate Family’s Account of Stardom, the Manson Murders, and a Crusade for Justice by Alisa Statman with Brie Tate (It Books, $26.99, 380 pages)

“Pardoning is God’s domain…  I forgave Sharon’s killers through His grace.   But, within, the laws of man, this forgiveness didn’t lessen the killer’s culpability or diminish my ambition to keep them in prison.”

This is an engaging and sometimes moving (and sometimes overdone) account of the life of a family that was terribly affected and afflicted by a brutal crime – the murder of Sharon Tate.   There are two names listed as authors, one being the domestic partner of Tate’s younger sister and the other her niece.   But, in fact, the book was written by four parties since it incorporates the words of Sharon Tate’s mother and father; both of whom intended to write their own memoirs.   And, to some extent, it was also written by Vincent Bugliosi as it borrows generously from his bestselling book Helter Skelter.

The one major flaw with this nonfiction work is that it was likely released at the exact wrong time.   I may not be correct (and I am not taking a side on this issue), but the political winds seem to be blowing in the direction of a moderately to dramatically less “tough on crime” approach than was exercised in the past.   This, at the least, appears to be true in California.

Restless Souls at times reads like a legal and political brief for locking them up and throwing away the key.   This is understandable as Doris Tate, Sharon’s mother, was a prominent figure in the victim’s rights movement in California and throughout the country a few decades ago.   She was recognized as one of the Thousand Points of Light by the first President Bush and worked very closely with California governors George Deukmejian and Pete Wilson.   Had this book been released in the period between 1980 and 1991, it would likely have drawn a great deal more attention that it’s going to get today.

A major part of the “Crusade for Justice” addressed in this account were the attempts by the Tate family to ensure that none of the Manson Family members were released from state prison.   These efforts were successful (Susan Atkins died in her cell); a fact which, ironically, takes away the weight and suspense of the telling.

Probably the most interesting of the four family member’s accounts is the one written by Sharon’s father P. J. who was in court during the Manson Family trials.   P. J.’s version of the courtroom dramas is fascinating, yet it takes a back seat to Bugliosi’s chilling version (Helter Skelter perhaps being the second best nonfiction account of a crime ever written, next to Truman Capote’s In Cold Blood).   This is something that’s apparent to Statman and Tate since a surprisingly – almost shockingly – lengthy excerpt of Helter Skelter is used here to describe the murders of Sharon Tate, Jay Sebring and the others at the home on Cielo Drive above Beverly Hills.

Astoundingly, Statman goes on to claim that Bugliosi’s book “was missing emotion” for the crime victims, something that could hardly seem to be less true based on the prosecutor’s writings and his work in court.   It’s the authors’ emotions, on full display, that make otherwise cold accounts, Helter Skelter, In Cold Blood and Joseph Wambaugh’s The Onion Field, so very stunning and moving.   These three books, once read are never, ever forgotten.

“Parents are covictims, and many of them get worse when the legal process is finished…  Now they begin to pine for their (lost) child in earnest…  They have to reconstruct their whole belief system because their assumptions about the decency of humanity, the security of social order, and justice are all shattered.”

Restless Souls serves as a needed reminder of how crime victims are often twice brutalized in our society and in the criminal justice system (having to deal with both a crime and its true aftermath in human terms), but I suspect it will mostly be read by criminal justice students as an historical account and not much more.

A review copy was provided by the publisher.   Restless Souls was released on February 21, 2012. 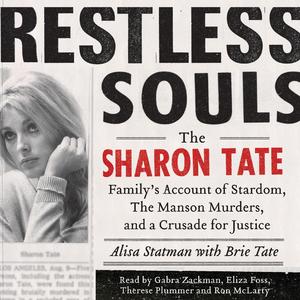