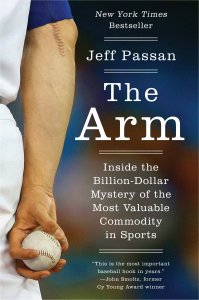 The Arm: Inside the Billion-Dollar Mystery of the Most Valuable Commodity in Sports by Jeff Passan (Harper, $26.99, 376 pages)

One of the first things nearly all of us who picked up a baseball as a little boy – dreaming of one day playing in the major leagues, heard was, “Now remember, son, you only have one arm.” Jeff Passan has written a must read for any baseball fan called The Arm, which delves deeply into the mystery of how this limb withstands the continued trauma of throwing a baseball until it finally breaks down.

Anyone who has taken the pitcher’s mound in any relatively competitive situation from youth travel ball, to varsity high school baseball, to college, to pro ball, has said on numerous occasions, “I can throw. Gimme the ball.” That is how pitchers are wired. In the pitcher’s mind, he can’t pitch and beat you if you don’t give him the ball. But, how much is too much? What is the right number for a pitch limit? How much rest is required under what circumstances? What types of training, conditioning and preventive measures work best? What actually causes the arm to break down? According to Passan, nobody knows for sure. He faults organized baseball for not being more proactive in this regard, though he does cite some progress in this area over the past couple of years.

In 1974 Dr. Frank Jobe made history by drilling holes into Tommy John’s elbow and weaving a new ligament into it to replace John’s torn Ulnar Collateral Ligament (UCL). This, of course, came to be known as “Tommy John surgery,” which now seems about as common for pitchers as putting their spikes on. According to Passan, instead of naming the surgery after himself – which is common when coining an innovative surgical procedure – he deferred to John, who he said is the one who had to undergo all of the pain and hard rehabilitative work. 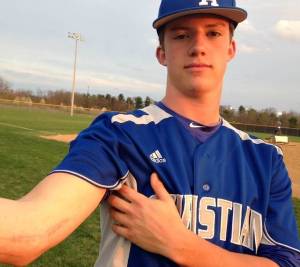 Two hundred and eighty-eight major league pitchers have had Tommy John surgery. Just two have had it twice: journeyman reliever Todd Coffey, and Dan Hudson of the Arizona Diamondbacks. A significant portion of the book chronicles their professional and personal highs and lows as they attempt to return to The Show.

The book addresses how travel ball and specialization has taken over youth sports and delves into one of the preeminent organizations in the country, Perfect Game. It goes back in time to trace the evolution of arm care, from Sandy Koufax and the premature end of his career, all the way up to Kyle Boddy of DriveLine baseball in Kent, Washington, and his controversial training approach using over and underweight balls. Also included are discussions of alternatives to going under the knife.

While Passan seems intrigued at the possibilities offered by some of the new approaches to training, prevention, and treatment, the book does not conclude with an answer as to how to better protect young and old pitching arms. That’s because nobody has the answer. It may be that throwing a baseball as hard as you can, thousands and thousands of times – over decades beginning at age eight or so, is simply a destructive act.

While The Arm does not supply a solution as to how baseball can protect the arms of Little Leaguers and college pitchers and professional throwers like Tomlin, Lacky and Rondon, it performs a service in focusing attention on the ongoing issue of constitutionally fragile arms. It’s a good start.

Dave Moyer is a school administrator in Illinois, a member of the Sheboygan A’s Baseball Hall of Fame, and is the author of Life and Life Only: A Novel.