Read This Book for Free

The hardbound version of El Gavilan: A Novel by Craig McDonald will cost you $24.95.   But you can read this new Tyrus Books release for free if you have an e-reader device, such as a Nook or Kindle.   That’s right, until the end of the day on Saturday, April 7, 2012 you can download El Gavilan (The Hawk, in Spanish) as a Nook Book or Kindle Edition release and be billed the special price of -$0-.   And if you’re busy, you can download it now and read it at your leisure at some point in the future. 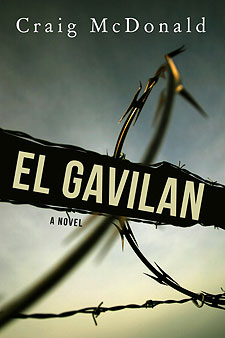 This “ripped from the headlines” story is about a community in Ohio where tensions have been building and escalating between the long-time residents and newly-arrived immigrants.   Once one of the immigrants becomes the victim of a brutal crime, “a war of all against all” may have been unleashed.   As stated in the synopsis, “El Gavilan is a novel of shifting alliances…  Families are divided and careers and lives threatened.”

David M. Kinchen wrote in the Huntington News (West Virginia):  “It is difficult to find a good book that explores the tensions in the nation’s heartland fueled by both legal and illegal immigration, but I think Craig McDonald has acted it in El Gavilan, a novel that the author has said was inspired by true events.”

The novel is a 4.5 star-rated book at Amazon, and the starred review by Publishers Weekly noted that, “McDonald deftly…  dissects one of America’s most tormenting social problems.”   The author lives in Ohio with his wife, two daughters and a dog named Duff.

Tyrus Books is a division of F+W Crime.   Reviewer David Kinchen, while noting that El Gavilan is “a nuanced thriller,” did issue a caution that the novel has “very graphic sex scenes and equally graphic violence.”