You Beat Me to the Punch 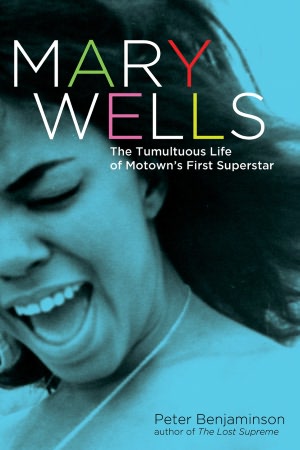 The singer Mary Wells had an amazing, crystal clear voice that was to presage what came later with The Supremes and Diana Ross.   Wells’ early ’60s-era singles, such as “You Beat Me to the Punch,” “My Guy,” “The One Who Really Loves You,” and “Two Lovers” were so perfectly recorded that it’s difficult, even now, to think of anyone attempting to cover them.   (Try substituting another singer’s voice in your mind.   Try it.   It can’t be done.)

The Queen of Motown died all too young from cancer at the age of 49, and in a basically impoverished state.   Wells’ dramatic riches to rags story offered cinematic-style opportunities for the right writer.   In Mary Wells: The Tumultuous Life of Motown’s First Superstar, Peter Benjaminson delivers an account that falls short of being extensive or definitive.   Biographies of artists – musicians, writers, fashion designers, actors – often come across as flawed when the biographer missed the chance to interview his or her subject.   While Benjaminson interviewed many of Wells’ “friends, lovers and husbands,” he was forced to rely on another writer’s dated one-on-one interviews with the singer.

Because Benjaminson cannot describe what it was like to be in Wells’ orbit or company, he takes the route of writing about “the sex, the violence and the drugs in her life.”   This is unfortunate because writing about Wells’ sexual partners, domestic violence incidents, and her illicit drug use does nothing to flesh her out as an artist.   The story of Wells’ life is told in such a straight-forward, chronological order that there’s no rush to turn the pages.   (It’s a book that I put down far more than I intended.)

The story’s momentum comes late, when Benjaminson deals with Wells’ clearly fatal cancer diagnosis and her poverty.   Wells might have been a multi-millionaire had she taken the deal offered to her by Berry Gordy to remain at Motown as a co-owner of the record company.   Instead, she left to begin what she felt was going to be a highly successful musical career with another label.   It was not to be, and Wells’ later may have repeated her mistake by turning down an alleged offer of $1 million from Gordy when she was quite ill.   (Benjaminson is unclear as to whether this offer was, in fact, ever put on the table.)

Mary Wells, the woman who – in her own words – “helped build Motown” was to survive by playing gigs in small clubs, in hotels such as the Sheraton Airport Hotel at LAX, at San Quentin State Prison, and basically wherever someone would offer her a few dollars to walk on stage.   It’s ironic that, as Benjaminson states, Wells was to pursue fortune, not fame during her lifetime but her terrible personal decisions left her with “no money to speak of.”

Where Benjaminson gets it right is in providing readers with details about Wells’ recording sessions at Motown (with the likes of Smokey Robinson and Marvin Gaye) and elsewhere.   These details are what draw the interest of music fans.   There are, however, some facts presented in this bio that may be open to question.   For example, Benjaminson insists that Wells was hugely popular for several decades in Latino neighborhoods in California, and specifically in the greater Los Angeles area.   This was not evident to this reviewer when I lived in L.A.

As with Mark Ribowsky’s The Supremes: A Saga of Motown Dreams, Success, and Betrayal (2010), which was highly focused on personal issues rather than on the music of the three performers, this bio by Peter Benjaminson left me feeling that I knew little more about the late, great Mary Wells when I finished it than when I opened it.   I suspect that one can discover more about her spirit, her character by listening again to her records, her songs — a life’s work.

A review copy was provided by the publisher.   This review first appeared on the Blogcritics Books site:  http://blogcritics.org/books/article/book-review-mary-wells-the-tumultuous/ .