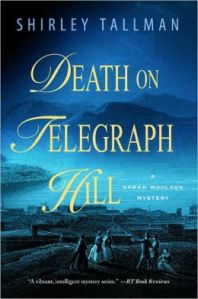 Author Shirley Tallman proves herself a true San Franciscan, even though she now resides in Eugene, Oregon. Period piece mysteries have a charm all their own with the absence of current-day electronics, modern modes of transportation and social mores. Tallman takes issue with the way women, especially accomplished women, were treated in the 1800s. Her main character, Sarah Woolson, is one of three women in California who have been admitted to practice before the State Bar. Ironically, both men and women discriminate against Sarah. Their efforts to keep her in her place and devalue her for lack of a husband and home are irritating but understandable considering the time in which the story is set.

Deep-seeted class issues also play a significant part in this mystery. Among the characters are a pompous wife and her meek husband, Oscar Wilde (yes, that Oscar Wilde), a young Jewish woman and two wealthy elderly women. The action takes place all over San Francisco; however, the initial murder victim succumbs on Telegraph Hill. The hill is a favorite place of artists, primarily writers, and a dalliance for Oscar Wilde is the prelude to mayhem on the hill.

The Telegraph Hill mystery is the fifth in a series. This reviewer found it easy to grasp the story line and the circumstances surrounding Sarah Woolson’s dedication to mankind and the downtrodden. Her father is a prominent member of the Bar and a notable figure in San Francisco. Sarah chooses not to trade on her connections unless it’s absolutely necessary. Lovers of The City and its history will enjoy this book in particular and most likely the series in general.

A review copy was received from the publisher. The prior books in the series are Murder on Nob Hill, Scandal on Rincon Hill, The Cliff House Strangler, and The Russian Hill Murders.

A review of Death on Telegraph Hill: A Sarah Woolson Mystery by Shirley Tallman. Read Chapter One here: