Arsenic with Austen: A Crime with the Classics Mystery by Katherine Bolger Hyde (Minotaur Books, $24.99, 312 pages)

Professor Emily Cavanaugh is a 21st Century woman who finds herself caught up in the dealings of a sleepy village on the Oregon coast. She’s been widowed for two years, is childless and growing restless with her duties in the Language and Literature Department of Reed College in Portland.

As would be anticipated in a traditional British mystery by Agatha Christie, Emily receives a piece of formal correspondence from an attorney in Stony Beach, Oregon. It seems her dear Great Aunt Beatrice has died and left her a legacy. What follows is one of the most heart-warming murder mysteries this reviewer has read.

Emily Cavanaugh is summoned to Aunt Beatrice’s funeral and the reading of the will. It seems Emily was fantasizing a modest inheritance when she hoped that the extensive library filled with leather bound books would be hers. Emily spent many summers sitting in that same library reading with the encouragement of her aunt. Clearly, the Victorian mansion, half of the town of Stony Beach and millions of dollars was way beyond her hopeful anticipation.

Yes, there are villains scattered among the townsfolk. How else would there be a mystery for Emily to solve? She also reconnects with her former boyfriend who seemingly dumped her at the end of a summer romance. As with Dame Agatha’s stories, Ms. Hyde leads the reader around leaving a trail of tantalizing clues and misdirection. 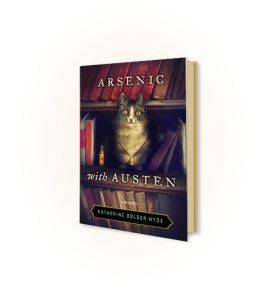 Author Hyde has hit all the right notes in this her debut mystery novel. She weaves in enough credible references to classic literature written by women such as Jane Austen and Emily Bronte to prove her in depth understanding of the genre. While Ms. Hyde is a resident of Santa Cruz County in California, she credits a writer’s retreat on the Oregon coast with inspiring the location of her tale. And, by the way, she is an alumna of Reed College. Let’s hope there will be more enjoyable mysteries from Ms. Hyde in the future.