For What It’s Worth

This is a link to a handy listing of 61 book reviews that we’ve written for this site and the New York Journal of Books:

The listing may be useful as a quick reference guide when you’re considering whether or not to purchase a particular book.   Thank you to author Therese Fowler for discovering this link!

“Somebody out there has turned a gun on two kids.   Whoever did it might be locked up now, and they might not.   If they weren’t locked up, then they were on the street and not far away.   It wasn’t six degrees out here, separating the guilty from the innocent, the living from the dead.   It was two degrees.”

This would have made for a great two-hour made for TV movie – a decade or two or more ago – when people felt they still had the time to watch such things.   Two outstanding males of high school age are shot (and one is killed) in front of  a drug house in Philadelphia, a killing which has shocked the community and the entire city.   The old guard police chief wants the crime solved by yesterday, so he turns to his most on-the-make young detective; a kid with a proven track record (the department’s “boy wonder”), and the best of instincts.

But there are two other individuals who have their own reasons for beating the detective at his own game.   One is the police officer father of the surviving high school students, who feels guilty over his shaming of a son who he viewed as less than masculine.   Then there’s the officer’s troubled and drug-abusing half-brother who sees this as his chance for redemption within the family.

As these protagonists engage in a race to solve the crime in a dangerous environment, things quickly become far more dangerous.   Control of the drug trade in this community already changed hands once in the recent past, and now there’s a full-fledged war to see which adult gang will control the multi-million dollar trade in the future.   This is a war fought with automatic weapons and snipers; a war in which friends betray friends.   The winners will be able to buy anything they want in life, the losers will be dead.

“The city was a box between the two rivers, a couple of miles up and down.   Chances were he really did already know the shooters.   And that they knew him.”

Our fourth major character is the city of Philadelphia, Philly, which is anything but inspiring or glamorous.   This is the tough and downtrodden city seen in the film Invincible, in which most folks are out of work and one’s leisure time is spent in dive bars and strip clubs.   The only job training program available is run by the drug dealers who own “the corners”, and it’s a program that is far from being sanctioned by the federal government.

“He thought about how everyone thought they had the right to do whatever they did.   Everything, no matter what.”

Author Dennis Tafoya does not easily or readily give up information to the reader, which in this context is a good thing.   The reader will be almost two-thirds of the way through the story before learning the simple reason the two young men were standing in front of a drug house on a dangerous night.   Tafoya makes you work for it, to become invested in his tough and gritty story.   It is an investment that pays off extremely well in the end. 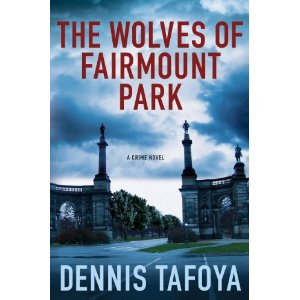