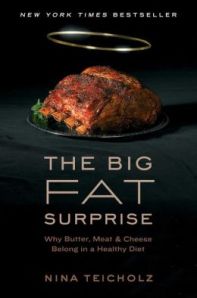 The dietary message from health authorities over the past 50 years has mainly been focused on reducing heart attacks – to the exclusion of acknowledgement of the rise in other diseases (obesity and diabetes in particular). The Big Fat Surprise is a startling account of the origins of the decades-long single-minded attitude about saturated fat, red meat, eggs and butter that has been crammed down the throat of Americans and the world. Author Nina Teicholz has broad, well-established credentials having written for Gourmet, The New Yorker, The Economist, The New York Times and The Washington Post. She has covered Latin America for National Public Radio.

As an investigative journalist, Ms. Teicholz approached the subject of low-fat nutrition from an attitude of curiosity in light of the staggering health problems currently plaguing millions of people. As an individual she experienced a dietary shock after a stint writing newspaper reviews of restaurants in New York City. Previously, she had been following the low-fat optimal health diet that our physicians, the government, and the press have admonished us is the only way to avoid heart trouble. Surprisingly, eating the meals sent out by chefs for review that featured “rich, earthy dishes” – not in any way part of the diet Ms. Teicholz had followed most of her life, resulted in a 10-pound weight loss and a true enjoyment of dining!

The book is the result of dedicated research, a thorough review of thousands of existing studies and literature, and hundreds of interviews with most of the surviving scientists, politicians and food industry insiders who have touted or doubted the association of dietary fat and fatal heart attacks. Ms. Teicholz spent nine years working on the book and her work is well documented. Poorly conducted research into the dietary habits of statistically invalid numbers of study participants were used by “the experts” to substantiate the supposed correlation between a “heart healthy” low-fat diet and reduced fatal heart attacks. Teicholz provides data and, by virtue of her footnotes and bibliography, enables any skeptical readers to see for themselves the basis of her conclusions.

The book leads this reader to accept that the basis for the low-fat diet is shaky at best and its outcomes are decidedly harmful. Moreover, its perpetuation is the work of a few politically minded individuals who have used nasty tactics and millions of food industry dollars to prop up their claims. We’ve been advised that man does not thrive on meat and saturated fats; all LDL Cholesterol is our enemy; and the best sources of vitamins and minerals are fruits and vegetables. Well, get ready to be educated about food, both historically and scientifically. Our American forefathers were not proponents of veggies and fruit, nor were the African Maasai people or the Inuit people of the far Northern Hemisphere.

Early American settlers were “indifferent” farmers, according to many accounts. They were fairly lazy in their efforts at both animal husbandry and agriculture, with “the grain fields, the meadows, the forests, the cattle, etc. treated with equal carelessness,” as one eighteenth-century Swedish visitor described. And there was little point in farming since meat was so readily available.

The Big Fat Surprise is a must-read for young and old alike. Sadly, some folks are deeply committed to the “wisdom” fed to them over the last 50 years and will resist the message Ms. Teicholz has so thoughtfully crafted. “You’re never too old to learn”, I was advised by my 90-year-old mom this past weekend. Now, if only I can persuade her to read this book, she can begin to enjoy eating real cheese instead of her low-fat cheese substitute!