The authors of this true-to-life, crime scene investigation novel are a team:  Dr. Bill Bass and Jon Jefferson.   Together they write as Jefferson Bass, in the same fashion that Douglas Preston and Lincoln Child write as Preston Child.

Bass and Jefferson have written several novels based on the work of Dr. Bass, who is a highly respected forensic anthropologist.   In these novels, unlike the CSI shows on television, there is no criminology practiced that relies on magic technological crime-fighting equipment dreamed up by a screenwriter.   The characters in The Bone Thief  must employ intellect, observation, and plain old footwork to solve a most perplexing series of body part thefts.

Dr. Bill Brockton, the chief protagonist, is a forensic anthropologist who works at the University of Tennessee managing the Body Farm, where the decomposition of human remains is studied.   He and his research assistant Miranda Lovelady (a name that’s a bit overly obvious) are drawn into a mystery involving the Federal Bureau of Investigation, while at the same time they’re on a quest to find a fresh set of hands for a colleague who received a massive dose of radiation while performing an autopsy.   The surgeon’s skillful hands are being destroyed by the radiation he encountered.

The story here is told in the first person by Dr. Brockton.   The underlying theme of the tale is Brockton’s introspection on choices he and others make, relationships and human frailty.   Recommended.

This review was written by Ruta Arellano.   Reprinted courtesy of Sacramento Book Review.   It is said that there is a real-life Body Farm managed by Dr. Bass.

The writing team of Douglas Preston and Lincoln Child (Preston & Child) have a winning franchise that stars Aloysius Pendergast, a Federal Bureau of Investigation agent with a distinctive southern drawl.   Fever Dream, their tenth in the series, is a mesmerizing story with an international twist.   Actor Rene’ Auberjonois’ narration heightens the atmospheric tension with a nimble voice that shifts easily from character to character.

The audio book was this reviewer’s first experience with the series and it will not be the last.   The story opens with the hideous death suffered by Pendergast’s wife, Helen, in the jaws of a lion during an African visit.   Fast forward 12 years to when Pendergast comes across evidence that leads him to the unavoidable conclusion that his soul mate was murdered and was not the victim of a natural occurrence.   The story shifts back to the United States and thus begins the obsessive hunt for Helen’s killer or killers.

The languid, lush atmosphere of the southern U.S. replete with wily characters and roadside diners makes it as much a character as is Pendergast, his brother-in-law Judson Esterhazy or sidekick, Vincent D’Agosta of the New York City police department.   This is a story of the obsession that is part of every character’s makeup.   There are meticulous details, vivid descriptions and a rather sweet ‘n salty taste to the language used by the characters.   Along the way, the listener is treated to fascinating historical information about John James Audubon who painted some of the most beautiful bird and animal pictures ever created.

This novel reminds this reviewer of the short story, “The Most Dangerous Game.”   Both are highly entertaining attention grabbers.

This review was written by Ruta Arellano.   A review copy was provided by Hachette Audio. 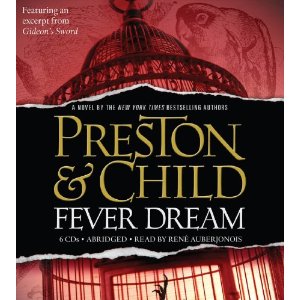 Thanks to Anna at Hachette Book Group/Hachette Audio, we have three (3) unabridged audio book copies of Fever Dream to give away!   This novel by Lincoln Child and Douglas Preston (known as Preston & Child) is ranked as a 3.75 star book at Google Books and as a 4 star book – out of a possible 5 – at Amazon.   The story is contained on 12 CDs and has a list price value of $29.98.

Here is a synopsis of Fever Dream:

At the old family manse in Louisiana, FBI Special Agent Pendergast is putting to rest his long-ignored possessions reminiscent of his wife Helen’s tragic death, only to make a stunning and dreadful discovery.   Helen had been mauled by an unusually large and vicious lion while they were big game hunting in Africa.  But now, Pendergast learns that her rifle – her only protection from the beast – had been loaded with blanks.   Who could have wanted Helen dead…  and why?

With Lieutenant Vincent D’Agosta’s assistance, Pendergast embarks on a quest to uncover the mystery of his wife’s murder.   It is a journey that sends him deep into her past where he learns much that Helen herself had wished to keep hidden.   As Pendergast probes more deeply into the riddle the answer to which is revealed in a night of shocking violence, deep in the Louisiana bayou – he finds himself faced with an even-greater question:  who was the woman he married?

In order to enter this audio book giveaway, just post a comment here or send an e-mail with the heading “Fever Dream” to Josephsreviews@gmail.com .   In order to enter a second time, tell us what you think about the idea of two authors joining – like Preston and Child – to write a novel together.   (We think it’s a “novel” idea!)

In order to be eligible to win an audio book in this contest, you must live in either the United States or Canada and have a residential mailing address (not a P. O. box).   You have until midnight PST on Monday, July 5, 2010  to enter.   This is it for the rules…  Good luck and good listening!