An Interview with Jojo Moyes 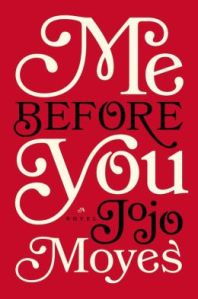 Jojo Moyes is the English author of Me Before You: A Novel, which is already an international bestseller. Her prior novel was The Last Letter from Your Lover. She recently completed a tour of bookstores in northern California and here she answers a few questions.

Q: Tell us a little about where your ideas for your characters and their stories come from.

A: They come from all over the place. It’s often a snippet of conversation or a news story that just lodges in my head and won’t go away. Sometimes I get an idea for a character too, and then unconsciously start knitting them together. Me Before You is the most “high concept” book I’ve ever written – in that I could describe it in two sentences. But most of them are a lot more organic, and just contain lots of ideas and things that I’ve pulled together. With this book I think the issue of quality of life was probably to the front of my mind as I have/had two relatives who were facing life in care homes, and I know that in one case she would probably have chosen any alternative to that existence.

Q: Which of the characters in Me Before You do you identify with the most?

A: Well, there’s definitely a bit of Lou in there. I did have a pair of stripy tights that I loved as a child! I think you have to identify with all your characters to some extent, or they just don’t come off the page properly. But I also identify with Camilla a bit. As a mother I can’t imagine the choice she has to make, and I could imagine in those circumstances you would just shut down a bit emotionally.

Q: We love the way you draw the social distinction between Lou’s working-class upbringing and Will’s upper-class background. Did you do that deliberately to introduce humor into what could otherwise have been a deeply tragic situation?

A: Yes I did. I thought that the subject was so bleak potentially that it was important to have a lot of humor in the book. But it adds a useful tension to the narrative too: offsetting the warmth and chaos of Lou’s home life with the more formal and reserved nature of Will’s relationship with her parents. And it gives Lou an added reason to feel totally out of her depth once she arrives there. From the point of the reader, it also gives Will a subtle advantage that is vital if we are to see him as Lou’s equal, and not just an object of pity.

Q: Your books always have an incredibly moving love story at the heart of them. What is it about the emotional subject of love that makes you want to write about it?

A: I have no idea! I’m not very romantic in real life. I guess love is the thing that makes us do the most extraordinary things – the emotion that can bring us highest or lowest, or be the most transformative – and extremes of emotion are always interesting to write about.

Q: Have you ever cried while writing a scene in any of your book?

A: Always. If I don’t cry while writing a key emotional scene, my gut feeling is it’s failed. I want the reader to feel something while reading – and making myself cry has become my litmus test as to whether that’s working. It’s an odd way to earn a living.

Q: Where do you write? Do you set hours or just put pen to paper when inspiration strikes?

Q: When you form characters do you ever incorporate aspects from people you know?

A: Yes – but often without realizing (it). Luckily if you write a negative character trait people are rarely likely to recognize themselves. More often though the characters have elements of myself which I then stetch and exaggerate until they become their own. Lou, for example, contains something of the character I could well have been if I had married the man I got engaged to at 17. I would have led a very different life.

Note: Me Before You is an Amazon Book of the Month for January 2013. “(It’s) a word-of-mouth sensation from Britain.” USA Today