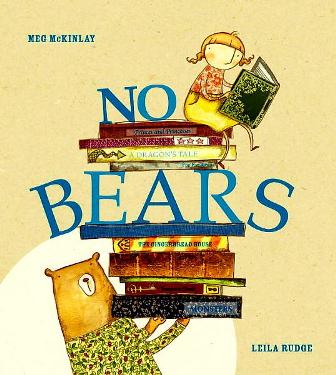 This is a novel children’s book written by Meg McKinlay, and illustrated by Leila Ridge.   It’s about a girl named Ella.   Ella loves books but is tired of reading stories that are filled with bears.   As she says, “I’m tired of bears.   Every time you read a book, it’s just BEARS BEARS BEARS…”   So she designs a story with pretty things, a princess, a castle, a monster and a giant.   Oh, and also a fairy godmother with magical powers that might be needed to save the princess from the monster.

This 32-page Candlewick Press book is wonderfully illustrated, and throws in a lot of cool, sneaky references to well-known children’s tales (young readers will have fun discovering such things as the Owl and the Pussycat).   It’s a great early reader because it includes standard phrases such as Once upon a time, Happily ever after, and The End.   And it’s relaxing and unique especially because there are said to be NO BEARS in it.   Not even one!

Written for readers aged 3 and up, and a few bright 2-year-olds.   Toddlers who love animals will appreciate it; especially as they find that there are actually a few loveable bears hidden in its pages.

It Won’t Be Long 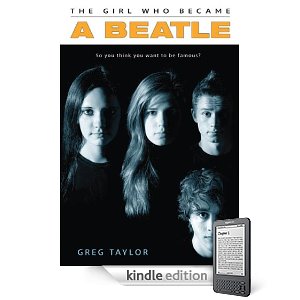 The Girl Who Became a Beatle by Greg Taylor

“I wish I were as famous as a Beatle.”

Sixties-inspired musician-songwriter Regina Bloomsbury is casting about for ways to keep her garage band from dissolving when, in frustration, she makes the wish that her band was as famous as the Beatles.   Fame, she reasons, would fix the problems in her life:  no boyfriend, a shaky self-image, and loneliness.   Enter the fairy godmother who Regina didn’t know she had, and suddenly she’s not just as famous as the Beatles, she’s inherited their place in history and their entire catalog of music.

Life in the Grammy lane is fab, but being the smart 16-year-old she is, Regina comes to understand the tradeoffs that go along with fame and world popularity.   Then the question becomes, Should she stay or should she go?

The Girl Who Became a Beatle (Feiwal and Friends, an imprint of MacMillan) is a rock ‘n’ roll-themed fairy tale for a young adult audience.   Though there is the drama of a girl-on-girl fight scene, for the most part the story maintains the innocence of the “I Want to Hold Your Hand” days.   The plot is fast-paced; the ending is satisfying, even though it’s predictable; and the characters are interesting “types.”   There’s the supportive, cool-in-a-Cosby–sort-of-way dad; the divorced mom who’d rather be a big sister; and the soulful band-mate love interest.   The problem is that the characters never step off the stage and run with the story.   Even Regina remains flat, especially when she wonders things like, “Are all teenagers like that?   Ricocheting from despair to euphoria within one turn of the minute hand?  If so, no wonder we’re always so exhausted?”

If the novel has the “tell, don’t show” feel of a screenplay, it’s probably because author Greg Taylor was a screenwriter before he started writing novels.   This is his second.   His first, Killer Pizza, is being made into a movie for 2013 release by Italian producer Raffaella De Laurentis (The Forbidden Kingdom, The Last Legion, Dragonheart: A New Beginning).   And according to the publisher, De Laurentis has optioned the film rights to The Girl Who Became a Beatle, too.

If you’re a YA reader who favors light, fast-paced, feel-good fantasies, don’t wait for the move version.   You’ll like The Girl Who Became a Beatle.   Especially if you’ve ever dreamed of any kind of stardom.

A review copy was provided by the publisher.   The Girl Who Became a Beatle was released on February 15, 2011.