“The tragedy of suicide is that only in its aftermath does everything that came before suddenly seem important and clear.”

This is a memoir that expresses the author’s unimaginable grief over the loss of a sister and a daughter within three and one-half months, and it is primarily a tribute to her late sister Kim.   Kim was just 21 when, after being dumped by her boyfriend, she killed herself by leaving her mother’s car running in the garage of the family home.   The work is an attempt by Bialosky to understand the depths of her sister’s long-time depression, and any hereditary factors that may have entered into it (this is a family that experienced three suicides in three generations). 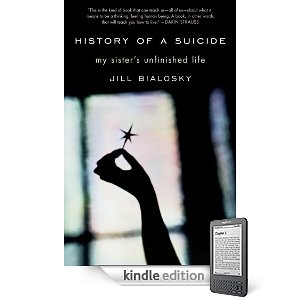 In her personal research, Bialosky found that Kim had been depressed at  least since high school.   At that time she wrote:  “I wish I would get (a major illness) or something so I could just die.   I don’t want to live anymore this way.   It’s too unsatisfying…  I need a way out.   Please help!”

Bialosky also came to realize that her mother’s detachment from the realities of lie may have been a factor:  “Perhaps my mother was able to sustain herself through her dark times by creating a hazy world of dreams and fantasies for a future in which everything would eventually work out.”

“I have private conversations with Kim on the beach.   I am thinking about you, I say to her.   Can you hear me?”

Despite her careful and caring research, Bialosky winds up being unable to pinpoint the exact nature of her sister’s inherent struggle with life and living.   She comes to see that persons who have been affected by suicide are often twice victimized – first, by the unexpected (and often violent) death; second, by the stigma attached to the act.   She cites as an example a young male in her neighborhood who was ostracized at school after his sister killed herself…  Punishing one of the victims of the act thus turns into a type of psychological piling on; it’s no wonder that those who were closest to the person who committed suicide often feel lost – literally without direction – for long periods of time.

Bialosky  comes to find a measure of recovery and balance in her life by attending a monthly suicide survivors support group:  “…in the white room… sealed off from the cacophony of traffic on the avenue below us – …the litany of what ifs and why didn’t I and if only rings like a chorus of voices in a Greek tragedy…  It seems to me that it isn’t as if they wanted to die but more that they wished to feel better and didn’t know how.”

The author’s sister Kim left a suicide note:  “I know everyone loved me very much.   Please don’t feel you could have helped.   I am very happy now.   All my love, K”

This all-too-sad memoir reminds us that the world holds “mystery and terror far beyond our grasp,” but also contains a great measure of forgiveness, acceptance and eternal love.

A review copy was provided by the publisher.   Note: The reviewer worked as a  volunteer suicide prevention counselor, and was taught that (as a counselor):  “You never lose someone and you never save someone.”   Mystery and terror, indeed.